Published By:
FARM-D
Hosted by:
Food and Agriculture Organization of the United Nations
Webinar Link
ABOUT THE WEBINAR
Food for Earth Day 2020 is the way to celebrate this new era: 24 hours marathon around the Globe and 24 different sessions in different Countries 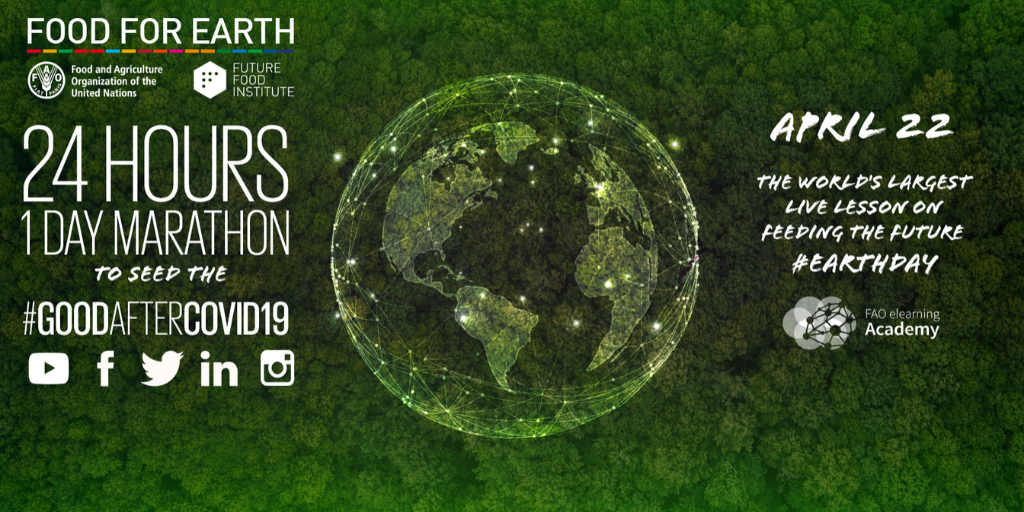 On April 22, humanity celebrates Earth Day 2020 in extraordinary conditions. And extraordinary conditions require different mindsets and behaviors. The World after Covid-19 will not be the same. Humanity has been forced to reshape mindset and behaviors in a more responsible and sustainable way. Pope Francis said: “We thought we’d stay healthy in a World that was sick”. We now enter a new era of consciousness that involves the relationship between humans and nature, not as separated one to another, but as a unique ecosystem where food and agriculture play a pivotal role to balance this relation.

Food for Earth Day 2020 is the way to celebrate this new era: 24 hours marathon around the Globe and 24 different sessions in different Countries. It’s the largest lesson on the regenerative power of food systems.

Future Food Institute and Food and Agriculture Organization of the United Nations (FAO) e-learning Academy organize this huge global event that regardless of boundaries, time zones and geographical areas is aimed to rethink the business as usual and to regenerate food systems.

The marathon will begin in China. This relay of positivity and goodness, like an ideal Olympic torch, will travel from East to West, passing from indigenous people that reflect the identity of entire territories to entrepreneurs, startups, scientists, journalists, young leaders, policymakers, consultants, farmers. The torch will pass from China to Japan, India, Middle East, Europe, Africa, Latin America, North America and even the North and South Poles, as we’ll be connected with scientists at the Concordia Station in Antarctica.

Focus Region:
Global
Focus Topic:
Agricultural Value Chains / Agri-Businesses
We use cookies to ensure that we give you the best experience on our website. If you continue to use this site we will assume that you are happy with it.Ok