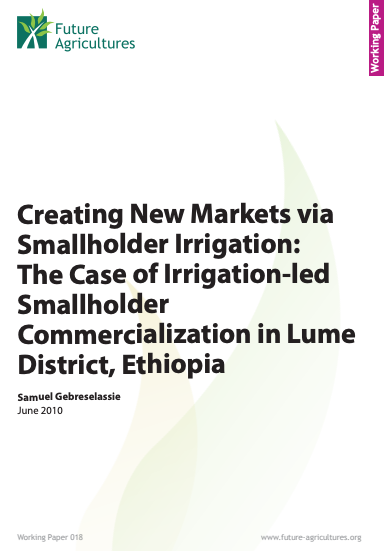 Following the 2008 global food crises, the agricultural development agenda has gained renewed international attention. Though this observed price instability reflects largely short-term disequilibria between supply and demand, many – especially major food importing countries – consider it an indicator of a new era that is characterised by much more unstable food prices on the international markets. Consequently, investors from these countries were encouraged to lease farm lands in relatively land and water abundant countries in Africa and other parts of the developing world. This study tries to generate insights that improve our understanding of ways in which small scale farming may become
commercialised, and the prospects and challenges for further commercialization. The study also looks at other
factors that drive the commercialization process and how
these vary vis-??-vis key household characteristics and
objectives like food security. As commercialisation of
agriculture is identified in Ethiopia as a means to reduce
poverty among small farmers, the study also looks at
some key outcomes of the intervention that indicate the
effect of commercialization interventions on poverty and
the incomes of participant farm households.

Keywords: Agricultural Development, commercialization, Food Security, irrigation, Smallholder farmers
We use cookies to ensure that we give you the best experience on our website. If you continue to use this site we will assume that you are happy with it.Ok