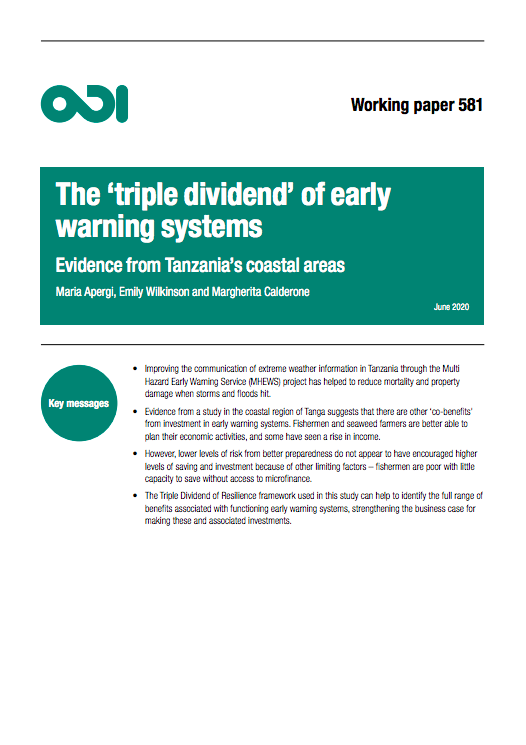 Early warning systems (EWSs) have been effective in reducing loss of life and injury associated with extreme weather events, but it is less clear what influence they have on other household decisions, and whether having greater certainty about the weather prompts small business and households to make different economic and personal choices. Some research has identified increased productivity in rainfed farming from using weather and climate information, but much less is known about fishing communities, where livelihoods also depend heavily on the weather.

This paper begins to fill this gap by examining the range of socioeconomic benefits associated with improvements in EWSs in coastal areas of Tanzania, including for fishing communities and the marine sector. It uses the Triple Dividend of Resilience (TDR) framework, developed by ODI, the World Bank and the London School of Economics (Tanner et al., 2015) to capture the direct, indirect and co-benefits of investments in disaster risk reduction.

The focus is on the Multi Hazard Early Warning Service (MHEWS) project, which established an impact-based five-day weather forecast service for coastal areas in Tanzania, as well as a series of alerts. The project improved the communication of warnings of extreme events by using pictorial symbols and colourcoding, and by providing information on the potential impacts of adverse weather – all coproduced with community members and other national and local stakeholders.

Based on interviews and focus group discussions (FGDs), our findings suggest that the understanding and use of short-term weather information has significantly improved as a result of this initiative. Receiving early warnings has reportedly led to a reduction in mortality and property damage from extreme weather events (the first resilience dividend) and an increase in household incomes (the third resilience dividend), where people engaged in fishing and related activities have been able to better plan their economic activities.

Receiving early warning information does not, however, appear to have encouraged higher levels of saving and investment in these coastal communities (the second resilience dividend). The most likely explanation is that disaster risk is only one obstacle preventing people from investing in more financially risky and potentially profitable activities. Poor people’s ability to save and invest is constrained, and so the second resilience dividend is less likely to arise than the other two dividends from investment in EWSs.

Capacity development and training for users, the media and staff of the Tanzania Meteorological Agency (TMA) has been effective but needs refinement, as problems of interpretation persist. One major challenge is reaching users in remote areas. Suggestions for improving coverage and use of the EWS include collecting phone numbers and registering them so that more users can receive information via SMS message; distributing mobile phones where necessary; and investing in infrastructure to increase electricity and internet access. It is important to have tailored, targeted information in EWSs, and to ensure that weather information is accompanied by practical advice on how to act.

Further exploration and quantification of these resilience dividends is required to better understand the scale of change (how many people have benefited) and sustainability (whether positive changes can be sustained over time).

Keywords: Early Warning
We use cookies to ensure that we give you the best experience on our website. If you continue to use this site we will assume that you are happy with it.Ok