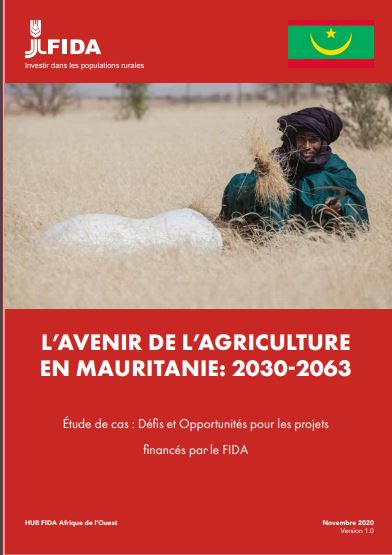 With its territory of 1,030,700 km2, Mauritania has an Atlantic coast and is bordered by Senegal, Mali, Algeria and on the northwest by Western Sahara. Originally, the country was mainly populated by nomadic tribes, who have now settled. The population was estimated at 4.5 million inhabitants in 2019, with an average density of 4.4 inhabitants/km2. Rural populations make up 44% of the total. The population is young, with 40% of Mauritanians under 15. If this trend continues, the population will reach almost 6 million in 2030, 9 million in 2050 and 17 million in 2100.

Mauritania saw an average annual economic growth rate of 3.8% between 2010 and 2019. The fall in world prices of raw materials and national oil production slowed the growth rate to 3.6% in 2018. The contribution of the rural sector to GDP was 19% over the period 1998-2000 and 16% over the period 2001-2004, a decrease due to a succession of natural disasters (droughts, locust invasion). The primary sector such as agriculture, forestry, fishing and mining activities contributes to approximately 30% of GDP. Poverty still affects 6% of total population, or 236,000 people.
About 20 million hectares (20% of the country’s surface) are suitable for various agro-sylvo-pastoral activities. The space dedicated to agro-pastoral activities barely covers 10% of the territory, including only 513,000 hectares of cultivable land, of which 135,000 hectares of irrigable land along the Senegal River and its tributaries. Cereal production, which is very irregular from one year to the next, covers only 30% of the needs of the population, making the country dependent on imports and food aid. The population’s dependency on imports is much lower for animal products, in particular red meat.

The activities are divided into four major agro-ecological zones: i) an arid or Saharan zone characterized by an oasis-type of production; ii) a Sahelian zone with irregular rains where rainfed crops are grown extensively and transhumant herding; iii) the Senegal River valley with irrigated agriculture; iv) and a maritime zone along the Atlantic coast, which is important for dairy and poultry farming and peri-urban vegetable crops in intensive mode.

There is a strategic reference framework outlined in the National Rural Sector Development Strategy (NRSDS) document, including a National Food Security Strategy. The NRSDS lays the groundwork for the development of the strategic agro-pastoral sector by 2025, including: i) agricultural sectors oriented towards vegetable and fruit productions according to different production methods, traditional cereal production in the rainfed areas and rice production along the Senegal River valley; ii) animal production including dairy production organized around modern industrial processing units and informal small milk production, processing and sales units, red meat production by small, medium and large breeders and a poultry production in peri-urban poultry farms.

Overall, food consumption projections indicate exponential growth but at different rates. Between 2020 and 2100, the growth in cereal consumption will increase fourfold, while that of red meat sixfold and that of vegetables twentyfold. During the same period, consumption needs should mobilize 3,359,000 ha of arable land area for cereal production, 478,000 ha and 565,000 ha respectively for vegetables and fruits. As the demand for red meat will reach 602,000 tons by the end of the century, total necessary investments in the agro-pastoral sector will amount to 107 million USD by 2030, 4.2 billion USD by 2050 and finally 9.6 billion USD by 2100. These required amounts are equivalent to 1% of the expected GDP in 2030, 19% in 2050 and 4% in 2100. It should be emphasized that the projections are not forecasts; they do not take into account phenomena such as the rhythm of demographic transition, the decline in fertility, or migration; not to mention food habit changes, the impact of climate change, or even inequalities in access to food.

However, this raises a number of questions on: whether such projections can actually occur, given the viable agricultural potential (particularly land) available or whether the financial and human costs are likely to be too high compared to the existing capacities, or even if the opportunity costs are worth it. Or simply whether they impose more targeted and more selective investment choices.

Keywords: Agricultural Development, Climate Change, Food Security, Marketing
We use cookies to ensure that we give you the best experience on our website. If you continue to use this site we will assume that you are happy with it.Ok