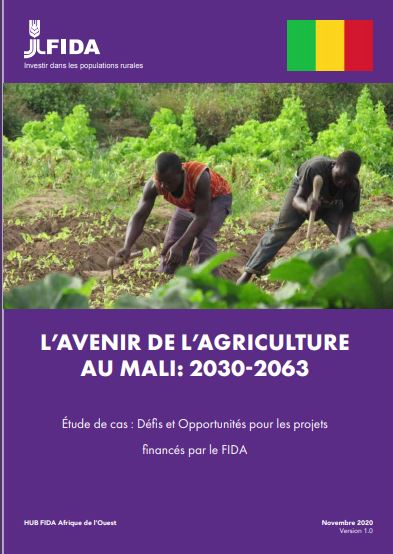 Mali’s economic performance improved markedly following the economic reforms of the 1980s and 1990s. Between 2016 and 2019, the average overall economic growth rate of GDP stabilized at 4.7% per year. Agriculture (including agricultural, animal, and inland fisheries), which employs around 60% of the working population, contributes to 30% of this economic growth.

Mali has invested a lot in its agriculture: 12% of public resources on average between 2004 and 2011, well above the 10% of the Maputo commitment (source: Resakss). Agricultural policies and incentive frameworks have improved significantly. The Agricultural Orientation Law (AOL), promulgated in 2006, considered as the unifying framework, formulates a long-term vision of a sustainable, modern and competitive agricultural sector. The National Agricultural Investment and Food Security Program, 2015-2025 (NAIFS), which represents the operational framework for the planning and implementation of the LOA, reflects the priorities centered on increasing the performance
of priority agricultural sectors in terms of production and competitiveness. The National Food Security and Nutrition Strategy, drafted in 1986 and reinforced in 2016, sets out a food security strategy intended to provide a sustainable response to the recurrence of food crises. NAIFS is part of the Regional Agricultural Investment Program which brings together national priorities under the Detailed Program for the Development of Africa Agriculture of the New Partnership for Africa’s Development (NEPAD).

Malian agriculture has experienced strong development in recent decades with agricultural dynamics that can be identified for food crops, particularly rice and corn, and for certain export crops for which the country has comparative advantages. Cereal production has increased since 2007, allowing for an adequate response to the 2007-2008 food price crisis. Agricultural production has covered to the growing and diversified food demands of a growing population (3% annual growth) and rapidly urbanizing, even if regional disparities make aid emergency food response necessary especially with the insecurity/conflict of the last decade. The producers have adapted their production conditions to meet the demands in terms of quantity and quality. This has allowed the agricultural and agri-food sectors to
take advantage of less volatile domestic markets and provide employment opportunities to women and young workers, who represent a very large proportion of population (65% under 25).

The exercise of projections and forecasts for the main productions shows increasingly significant gaps of production for cereals from 2030 onwards. Conversely, the gaps are largely filled for roots-tubers and fruits and vegetables. The gaps are significant for animal products, as of 2050. This first reading suggests keeping the focus on cereals including rice, but also on traditional cereals (millet, corn, sorghum). Roots and tubers are moving from simple marginal products to real productions due to their high production potential, their various use for food and processing in food industry. The interest in fruits and vegetables reflects their growing role in food diversification, sweet drink industry and export of those with comparative advantage. Interest in animal products is growing rapidly due to market opportunities, especially urban ones.

Keywords: Agricultural Policy, agriculture, Climate Change, Food Security, French, Mali
We use cookies to ensure that we give you the best experience on our website. If you continue to use this site we will assume that you are happy with it.Ok