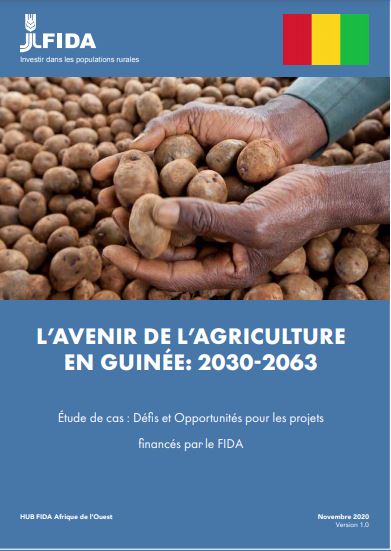 Guinea has considerable assets to protect its population from food and nutritional insecurity and to escape poverty: i) a strategic geographical position in the sub-region, bordering 6 countries and the Atlantic Coast, enabling it to be an economic hub by capturing a large part of sub-regional trade; ii) abundant natural resources of water, agricultural land, forest and fishery resources allowing for the production of a wide range of food and export crops; iii) remarkable demographic dynamics with a young and mainly rural population. Estimated at around 13 million in 2020, the population is set to double by 2050 and triple by 2100.

However, these assets do not yet generate a desired macroeconomic and social situation: i) economic performance has remained structurally weak with GDP growth recording an annual average of 2.4% to 3.4% between 2004 and 2018. With per capita income estimated at 897 USD / capita, Guinea is classified among the less advanced countries. Agriculture remains below its potential, representing 24% of GDP in 2018. The country is dependent on imports mainly rice and other cereals, and animal products, even if it exports of other agricultural products have been growing; ii) poverty affects 53% of the total population, 63% of which in rural areas; women represent 60% of the rural poor; poverty exacerbates food insecurity which affects around 35% of rural households.

Youth employment is the central issue for decades to come. To reap the fruits of the demographic dividend, youth need to be socially and economically integrated in the urban and rural fabrics. In this perspective, agriculture has the power to provide many opportunities to young people, particularly in self-employment and entrepreneurship in short-cycle breeding, and in the provision of services in food value chains induced by the evolution of food systems. The new information and communication technologies could offer opportunity to which young people naturally aspire; as well as organic farming and «green jobs».

Climate change has serious implications on all aspects of food security and nutrition, through its impact on the availability of water, crops, livestock, forests, fisheries and the ecosystems. The four dimensions of food security are thus affected: reduced availability of quantities of food, increased food prices, reduced food quality, early sales of assets and instability of supplies. Particularly vulnerable to the impact of climate change, family farmers are a priority due to their fundamental role in food security and the preservation of natural resources.

The projections of food consumption and needs show a diversified diet with the following features: i) the predominance of cereals and roots / tubers ii) the search for protein-energy balance in food rations with the moderate addition of other products of plant and animal origin (vegetables, legumes, meat-offal, oils-fats, fish-seafood) often consumed as sauce products, or occasionally (milk / milk products, sweet products).

The available natural assets are able to meet future needs in terms of arable and irrigable land and production of a wide variety of products. A coherent intervention framework is explicitly formulated in the National Agricultural Development Policy drawn into programs relating to: i) a sustainable development of food (particularly rice) and animal productions systems; ii) promotion of agricultural exports; iii) development of productive, access and market infrastructure; iv) integrated management of natural resources; v) capacity building for POs, private sector and agricultural services; vi) development of supply markets of agricultural and veterinary inputs and equipment; vii) and strengthening of the agricultural sector financing system. The NADP is adjusted to regional specificities and to developing agricultural models. It is inclusive and relies, for the most part, on the evolution of family farms.

The forecast exercise sheds light on the importance of different food products in consumption according to their caloric, food and nutritional role. In addition, it provides a better understanding of what is at stake in the evolution of dietary changes, both for agriculture and for nutrition and health, trade, employment, etc. However, this exercise deserves to be accompanied by more specific approaches to eating habits and practices according to urban and rural areas, regional representations, etc.

Keywords: agriculture, Climate Change, Food Security, French, livestock health and diseases, Marketing, Risk Management
We use cookies to ensure that we give you the best experience on our website. If you continue to use this site we will assume that you are happy with it.Ok