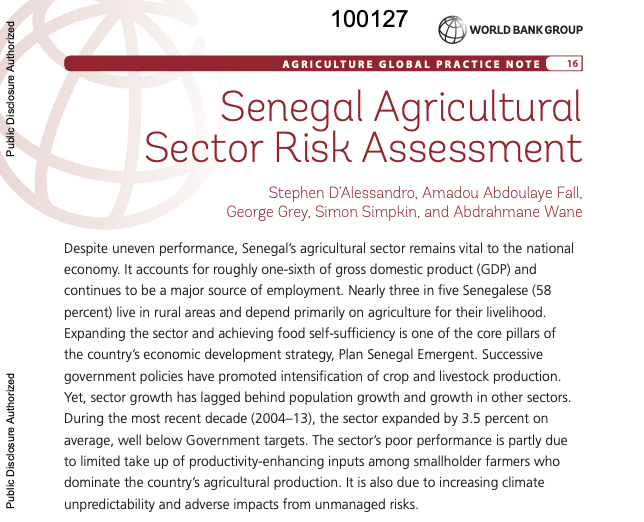 Despite uneven performance, Senegal’s agricultural sector remains vital to the national economy. It accounts for roughly one-sixth of gross domestic product (GDP) and continues to be a major source of employment. Nearly three in five Senegalese (58 percent) live in rural areas and depend primarily on agriculture for their livelihood. Expanding the sector and achieving food self-sufficiency is one of the core pillars of the country’s economic development strategy, plan Senegal emergent. Successive government policies have promoted intensification of crop and livestock production. Yet, sector growth has lagged behind population growth and growth in other sectors. During the most recent decade (2004-13), the sector expanded by 3.5 percent on average, well below government targets. The sector’s poor performance is partly due to limited take up of productivity-enhancing inputs among smallholder farmers who dominate the country’s agricultural production. It is also due to increasing climate unpredictability and adverse impacts from unmanaged risks.

Keywords: Agricultural Risk Management, Climate Change, locust, policy note, Senegal
We use cookies to ensure that we give you the best experience on our website. If you continue to use this site we will assume that you are happy with it.Ok