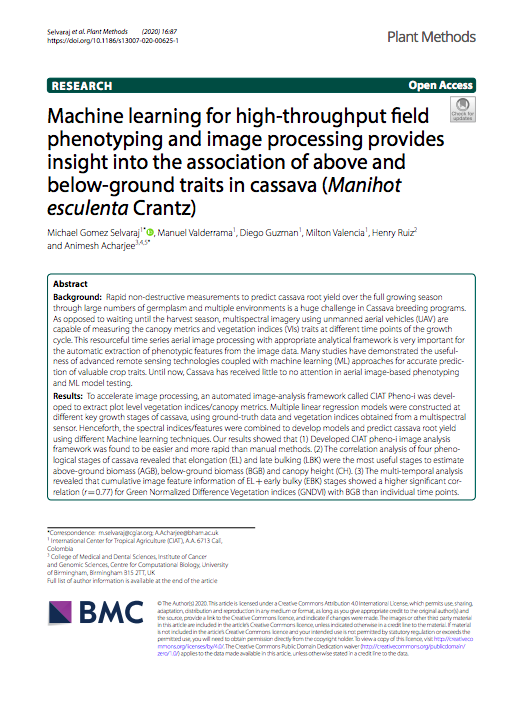 Background: Rapid non-destructive measurements to predict cassava root yield over the full growing season through large numbers of germplasm and multiple environments is a huge challenge in Cassava breeding programs. As opposed to waiting until the harvest season, multispectral imagery using unmanned aerial vehicles (UAV) are capable of measuring the canopy metrics and vegetation indices (VIs) traits at diferent time points of the growth cycle. This resourceful time series aerial image processing with appropriate analytical framework is very important for the automatic extraction of phenotypic features from the image data. Many studies have demonstrated the usefulness of advanced remote sensing technologies coupled with machine learning (ML) approaches for accurate prediction of valuable crop traits. Until now, Cassava has received little to no attention in aerial image-based phenotyping and ML model testing.

Conclusion: UAV platforms, time series image acquisition, automated image analytical framework (CIAT Pheno-i), and key vegetation indices (VIs) to estimate phenotyping traits and root yield described in this work have great potential for use as a selection tool in the modern cassava breeding programs around the world to accelerate germplasm and varietal selection. The image analysis software (CIAT Pheno-i) developed from this study can be widely applicable to any other crop to extract phenotypic information rapidly.

Keywords: Machine learning
We use cookies to ensure that we give you the best experience on our website. If you continue to use this site we will assume that you are happy with it.Ok