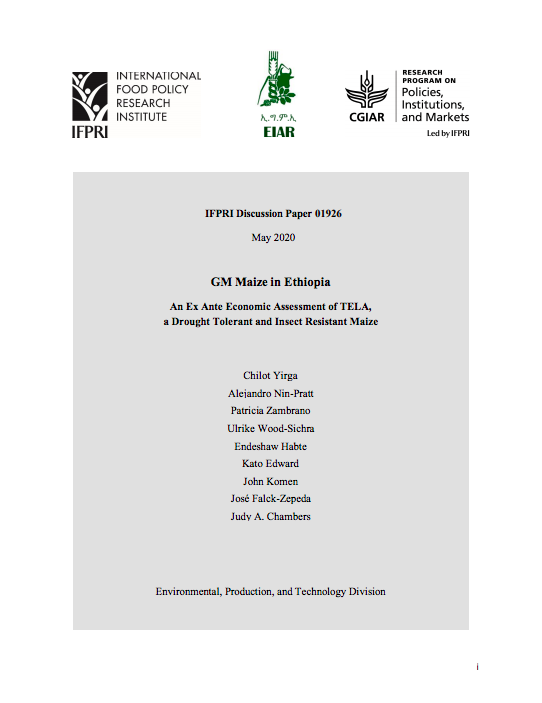 Ethiopian economy has grown at an average rate that surpasses that of almost any other economy in the region over the last two decades. At the center of this development is the high priority placed on accelerating agricultural growth and achieving food security and poverty alleviation. Over the years, maize has become a main food security crop, widely produced and consumed by smallholder farmers, second only to teff in terms of area. Despite the sustained growth of maize production over the years, its yields continue to be lower than the world’s average. Of the many abiotic and biotic constraints that maize faces, insect attacks and droughts are two critical ones.

The genetically modified TELA maize can help address these constraints. This paper estimates the economic benefits of adopting this new technology and the opportunity cost that Ethiopia will incur if its adoption is delayed. The analysis is conducted using an economic surplus partial equilibrium model run with the newly developed DREAMpy software, data drawn from the Ethiopia Socioeconomic Survey, Wave 3 2015-2016, econometric estimations using these survey data, and other local data and sources.

The estimations show that if the drought tolerant and insect resistant TELA maize is planted in 2023 the net present-value of benefits for producers and consumers would be around $850 million. Producers from the mid-altitude maize zone will be the main beneficiaries, given the targeted area of TELA maize. Consumers from all areas will benefit from the projected reduction in price. If the adoption of this new technology is delayed by 5 years, the estimated net present value of benefits will fall by 30 percent. These costs underscore the importance of having a regulatory system that is efficient, predictable, and transparent and ensures that the projected economic benefits are realized.

Keywords: Drought
We use cookies to ensure that we give you the best experience on our website. If you continue to use this site we will assume that you are happy with it.Ok