A research has found consistent increases in biodiversity with decreasing average field size, which indicates that farmers can maintain or increase biodiversity in agricultural landscapes by planting their crops in smaller fields.

This is distressing for nature lovers. It is also worrying on a practical level: in agricultural landscapes, wild species perform many important activities such as pollination and control of insect pests.

A highly effective way to reduce biodiversity losses in agricultural regions is to increase the amount of natural and semi-natural habitats such as forests, hedgerows, prairie strips and other non-crop areas. This has led to various government incentives for farmers to leave some areas out of production. But there are limits to how much land farmers can leave for biodiversity, while foregoing opportunities for crop production.

The benefit of small crop fields

Small fields can help. Farmers can maintain or increase biodiversity in agricultural landscapes by planting their crops in smaller fields.

For example, instead of planting two large fields, they could plant eight small fields, keeping the same total amount of land in production. Note that this is not about the size of a farm, but about the average size of crop fields.

A very large farm could, in theory, be composed of a very large number of small fields, where a “field” is an area in a particular crop type, such as a corn field or a hay field. Adjacent areas in the same crop type are separate fields if they are divided by even a narrow bit of non-field such as a hedgerow, a fence line, a track or a ditch.

My colleagues and I have found remarkably consistent increases in biodiversity with decreasing average field size, across eight very different agricultural regions in five countries — and for a wide array of wildlife types.

The number of species of plants, pollinators including bees, butterflies and syrphid flies, and pest-eating wildlife such as spiders, carabid beetles, birds, frogs and bats, all increase with decreasing average field size. For example, biodiversity is about 50 per cent higher when the average field size drops to two hectares from eight hectares. 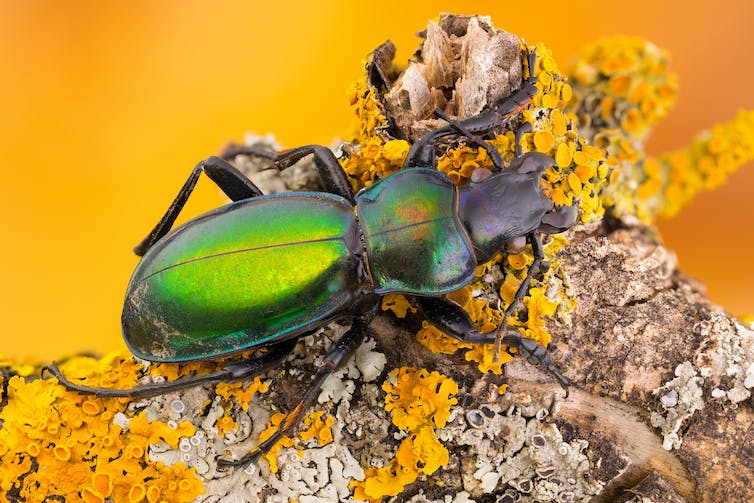 Pest-eating wildlife, such as this carabid beetle, can benefit crops. (Credit: Shutterstock)

In fact, the benefit to biodiversity of reducing crop field sizes appears to be greater than two other commonly suggested methods for increasing biodiversity in agricultural landscapes — reducing pesticide use and increasing crop diversity, the number of different crop types grown in a landscape.

The best of both worlds

Our research shows that in fact biodiversity is higher in a landscape with smaller crop fields, even for the same total amount of natural and semi-natural habitat, including all the little pieces such as hedgerows. 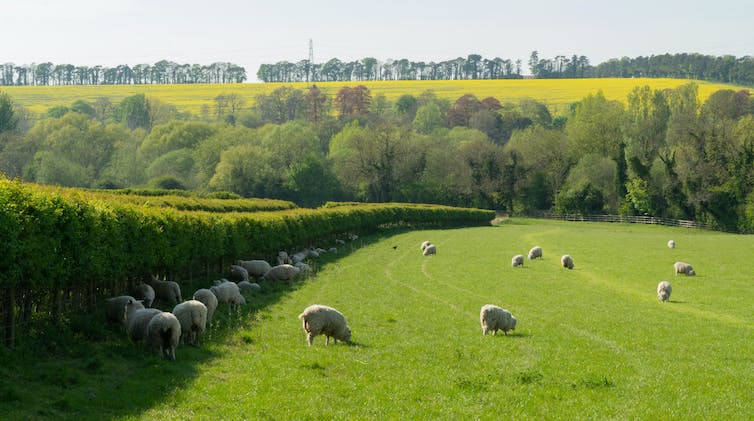 Small strips of natural and semi-natural habitat, like this hedgerow, can provide wildlife with an area for food, breeding or an escape from farming operations. (Credit: Shutterstock)

We don’t know yet why biodiversity is higher in landscapes with smaller crop fields. One possibility is that when crop fields are smaller, the natural habitats are closer together.

This would increase the ability of wildlife to easily access natural habitats from crop fields. Crop fields may provide temporary food sources for wildlife, such as when a crop is in flower or when there is a pest outbreak. Natural areas are also needed for breeding and overwintering sites and for escape from farming operations such as plowing.

When wildlife can easily move back and forth between crops and natural spaces, perhaps they have access to the best of both worlds.

Altogether, our research suggests a “many small” approach to support biodiversity in agricultural landscapes.

But can farmers readily reduce the sizes of fields? In many parts of the world, just the opposite has been happening over the past 50 years.

Fields are being consolidated by removing the tracks, fences, stone walls and hedgerows that once separated them. Farmers do this to increase the efficiency of their operations. But in doing so, they reduce the populations of wildlife that help support agriculture.

The net cost or benefit to farmers of reducing field sizes while maintaining the same area in production has not yet been studied. But the benefits to biodiversity are now clear.