See how permaculture transformed farmland in Nepal from barren to lush

Following in the footsteps of thousands of young Nepalis before him, 24-year-old Megnath Ale Magar left his village of Dungeshwor in Western Nepal to chase dreams of a better life in the Middle East.
After nearly a decade abroad, Megnath’s new ambition was to invest his earnings cultivating his family’s land back home. But when he returned, he barely recognized the environment around him. “After nine years in Qatar, I arrived home to barren, degraded farmlands,” recalls Megnath.

Around the same time, Shrikanta Adhikari, an agriculture specialist with the IFAD-financed Adaptation for Smallholders in Hilly Areas (ASHA) project, was looking for farmers to establish permaculture farmer field schools. In these schools, smallholder communities would receive hands-on training on permaculture practices.

When Adhikiri visited Megnath’s land, he noticed it was ideal for establishing a farmer field school. But what impressed Adhikari the most was Megnath’s tenacity. “I found his energy, motivation, and attention to detail remarkable”, says Adhikari. “He was perfect to head the farmer field school and to spread these green practices across the community.”

Permaculture is a sustainable and self-sufficient farming approach that mimics the diversity and resilience of natural ecosystems. It improves climate resilience, reduces input costs and is highly effective in rehabilitating degraded soil. Given that around 10 per cent of agricultural land in Nepal is severely degraded, permaculture could be a game changer in the country.

Megnath participated in a number of trainings, including a rigorous 14-day permaculture design course where he learned how to plan every inch of the farm – from the slope and the drainage, to the energy flows and the production zones.

After the training, Megnath established a permaculture farmer field school in Dailekh district. He continued to receive financial support and technical guidance from ASHA to run the school and rehabilitate his farm land.

That was three years ago. Today, the transformation of his farm is astounding.

Megnath has set the standard for ecological rejuvenation, using a range of land and water management practices, including plastic-lined ponds, swales to manage water run-off, contour hedgerows to fortify the soil, and silt traps. To nourish the soil while managing pests and diseases, Megnath uses bio-compost, biochar (a charcoal-like material that is produced from plant materials), biofertilizers and bio-pesticides, fungicides and insect traps.

The farm stands out for its diversity and has over 200 varieties of plants and perennials. He even has bee colonies for pollination and honey. “Even in the driest period of the year, his farm is lush and diverse,” remarks Roshan Cooke, IFAD Country Director for Nepal. 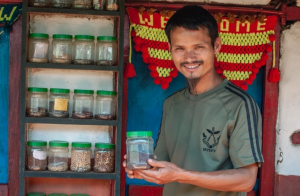 Megnath takes pride in maintaining his own seedbank, which includes some indigenous heirloom seeds that have been in his family for more than 100 years. © IFAD/Kaushal Shrestha

The once barren soil is now rich and teeming with microorganisms—the cornerstone of productive agriculture.

A close look at the soil in Megnath’s farm reveals an intricate network of mycelium – root-like fungus colonies most prevalent in the rich soils of heavily forested areas. © IFAD/Kaushal Shrestha

And it’s not just the soil that’s better off. With the money he earned from his land, Megnath built a stone house with plumbing and paid for his sons’ education. What does Megnath think about his new-found vocation? “Without permaculture, I would be nowhere. This is my life now.”

Find out more about IFAD’s work in Nepal.
Read more about agroecology for sustainable food systems