From subsistence to self-sufficiency: how women in Sudan are using savings and credit groups to build a better future

Farmers and pastoralists in the small village of Yarwa, in Sudan’s semi-arid region, face several threats to their way of life. Climate change and environmental degradation are damaging lands, destroying forests, and increasing the risk of drought, while the growth of commercial mechanized agribusiness is reducing their access to land.

In a changing world, traditional forms of subsistence farming are no longer enough to prosper. But, for a long time, small-scale farmers and pastoralists didn’t have any way of accessing finance to grow their businesses. And women, especially, were held back by societal norms which gave them little say in financial decisions.

Today, however, the 13 members of the Alwifaq women’s savings and credit group are charting a way to a better, more resilient future for their community.

“Before, women in our community only gathered for occasions like marriages and funerals,” says Fatima Ahmed Adam, the group’s leader. “But these women are committed to our cause, because they’ve realized what incredible benefits come from it.” 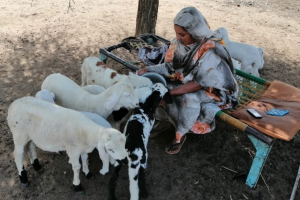 Established in 2017, Alwifaq, which means “harmony”, is bringing the community into the economic mainstream. With support from the IFAD-supported LMRP, its members are transforming how they think of agriculture: not just as a way to meet their immediate needs for food and shelter, but as a business that can grow and help their households prosper.

LMRP integrates rural pastoralist communities into the wider economy and provides access to financial services that are not usually available to them. It helps transform gender relations at home and in communities. Using IFAD’s pioneering Gender Action Learning System (GALS), families consider the true contributions of women.

Through LMRP, Alwifaq members were trained in management and finance. The members contribute to the group’s savings each month and draw on this collective sum for internal loans. The interest increases the group’s capital over time.

Taking this a step further, LMRP linked the group to microfinancing institutions so they could use their pooled funds as collateral to obtain loans from microfinance institutions and invest in their livestock. They have also invested in insurance to protect against climate or other shocks.

Alwifaq members use this microfinance to buy and rear livestock, which they sell at the market in the nearby town of Damazin. The livestock fetch particularly good prices around the Eid holiday when demand is high. The women use the profits to buy what they need for their home or to grow their business, like tools or carts. This not only helps them prosper, it alleviates poverty and makes them more resilient to future shocks, such as those caused by climate change impacts or rising food prices.

Alwifaq is now a formally registered legal entity, with its own bank account and insurance to protect against unexpected losses. Whereas most rural women in Sudan don’t have official IDs, all the members of Alwifaq now have personal documents and ID cards and negotiate directly with bank representatives. For their part, officials at financial institutions are full of praise for the group’s dedication to increasing production and their integrity.

One Alwifaq member, Um Alkiram Alzain, describes how she started with a small investment in sheep. She has taken out six loans so far, and each has helped her to progressively grow her business.

Another member, Magboula Alhadi Alsayed, recounts how having access to insurance helped save her from ruin when the sheep she had bought with a loan all died.

“I thought I had lost everything,” Magboula says. “But Fatima went to the insurance company and they compensated me for my loss.”

The LMRP has established thousands of savings and credit groups dotted over five states across Sudan. These women’s groups are granting access to finance for thousands of rural households—something that was not available to many before. They’re improving incomes, buying better food, saving for the future, and transforming harmful gender norms. In fact, the initiative has been so successful that similar youth groups are now being set up.

Find out about IFAD in Sudan.

Explore more of our work on gender and farmers’ organizations.