Developing digital tools to optimize water use in agriculture

Research indicates that farmers can use about 40% less water to produce a good potato harvest through a combination of monitoring with thermal cameras and drip irrigation.

Agriculture accounts for about 70% of global freshwater use, and as the population grows, so will demand for water. At the same time, global warming is increasing water loss through evapotranspiration, and intensifying the risk of drought in many regions. This confluence of factors makes it vital to improve the efficiency of irrigation so farmers can produce enough food for the more than 9 million people predicted by 2050.

Potato has good potential to help the world meet that challenge, since it produces more calories per liter of water than other major staple crops. Scientists at the International Potato Center (CIP) are trying to enhance that potential through the development of digital tools to optimize the use of water in irrigation.

A team of researchers led by crop ecophysiologist David Ramírez has used a combination of conventional and thermal cameras to study how potato plants react to water stress. In field studies in the rain-deprived coastal desert of Peru, they shot infrared and visible images of a potato crop at different times of the day to detect changes in the temperature of the leaf canopies that are part of potato’s response to drought stress. They also developed open-access software called Thermal Image Processor (TIPCIP) to analyze those images, and created an early-drought-stress index to identify an indicator for when potato plants reach the threshold at which they need to be watered or their yields will be compromised.

By irrigating only when the plants reached that threshold, the researchers were able to greatly reduce the amount of water used in irrigation without provoking yield loss – an approach that farmers can use in areas where water is scarce to optimize their water use.

“Our research shows that through a combination of monitoring with thermal cameras and drip irrigation, farmers can reduce the water needed to produce a good potato harvest by at least 1,600 cubic meters per hectare, which is about 40% less than is used in traditional surface irrigation systems,” Ramírez said. 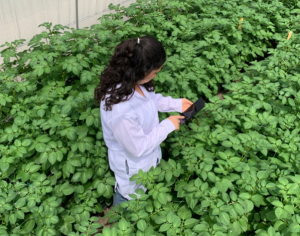 A plug-in that converts a smartphone onto an infrared camera makes monitoring potato crops for drought stress affordable.

He explained that on large farms thermal cameras can be mounted on unmanned aerial vehicles to monitor water stress, but this method is prohibitively expensive for most small and medium-sized farmers. As an alternative, Ramirez has tested a more affordable option – a plug-in device that transforms a smartphone into an infrared camera, which costs around USD 200 with support from the CGIAR Research Program on Roots, Tubers and Bananas. CIP scientists have developed a user-friendly version of TIPCIP to analyze smartphone images, and are planning a future version of the program to provide farmers with more specific information about when and with how much water to irrigate.

“Through the use of open-access technology and affordable tools, we can help farmers produce food with less water,” affirmed Ramírez.

A combination of better water management and drought-tolerant varieties could greatly enhance the potato’s resilience in future climates and enable its cultivation in regions where little or no food is currently grown, or during dry months when farmland now lays fallow.

But the technology alone is not enough. Ramírez added that such advances need to be complimented by policies that promote more efficient and sustainable management of water resources.

As climate change and population growth advance, such improvements can help ensure that the potato growers, and farmers of other crops, can continue to produce the nourishment the world needs while staying within the planet’s ecological boundaries.