Mariam Ntungu, a woman farmer from Singida’s Ikungi district in central Tanzania, spent decades cultivating the small piece of land behind her home and had resigned herself to yielding only enough to sustain her family.“If we got lucky, we had a little extra to sell and give our children some meat or eggs that week, but sustaining this didn’t seem possible at the time”.

Mariam’s story is similar to that of many women farmers in the country, where—although women are the majority of the agricultural labour force—multiple barriers stand in the way of their empowerment. 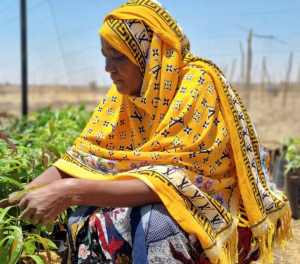 Women have limited access to and control over productive resources like land and capital. Only 8 per cent of women in the country own land independently, and only 4.1 per cent of land has a woman’s name on the title. Because of discriminatory norms, only men traditionally inherit land. This means women are often only able to farm their spouse’s land—or rent land, with limited access to capital and no collateral to access loans. This inadequate access to financing further impacts their ability to purchase the tools and other necessary resources, such as seeds and fertilizer.

Climate change, reflected in changing weather patterns and decreasing crop yields across the country, is already taking a toll on Tanzania’s agricultural sector. It is also deepening inequalities within the sector: women are less likely to have access to the knowledge and technology they need to build their resilience against these shocks.

In the face of these challenges, women from Mariam’s district decided to join forces. They organized  themselves into producers groups, pooling their resources to cultivate larger pieces of land and farm sunflowers—the most profitable crop farmed in that region. By selling their crops as a collective, the women have been able to attract larger customers.

In 2020, Mariam joined one of the producers groups. That same year, as part of the UN Women and UNFPA joint programme “Realizing Gender Equality through Empowering Women and Adolescent Girls”, UN Women partnered with Farm Africa to build the capacity of her group, along with 15 other women’s producer groups in surrounding villages, on modern, climate-smart agricultural practices. The women received training on drip irrigation, methods for better water management, and sustainable strategies to improve the productivity of sunflower farming

They were also given hybrid sunflower seeds, which are more resilient to climate change, and linked with agricultural marketing cooperatives to enhance their access to markets.  Through a warehouse constructed under the programme, they will also be able to store their crops longer and boost post-harvest sales.

To date, over 300 women have benefited from the programme, increasing their income almost two-fold. Mariam’s producer group has used the new revenue to diversify their crops, adding tomatoes, onions and watermelons, and Mariam was able to start a small chicken farm of her own.

As a result of a partnership between UN Women and the Tanzanian Government, she is now also a proud land-owner.

With evidence showing that increasing women’s land ownership improves their farming productivity,  UN Women partnered with the Tanzanian Ministry of Lands, Housing and Human Settlements as well as local authorities to draft village land-use plans. These plans help protect women’s land ownership rights under customary law, allowing women to legally register the land they own, either independently or under co-ownership, by obtaining certificates of customary rights of occupancy (CCROs).

“Over 5,000 CCROs were issued in four villages of the Ikungi district, most of which were issued to women,” said Ms. Hodan Addou, UN Women Representative in Tanzania. “By increasing women’s access to land, they have been able to cultivate larger crops, increase their access to loans and expand and diversify their farming activities.”

As beneficiaries of the capacity building on land rights, Mariam and her husband agreed to register both their names on the CCRO for the land they owned, giving her joint ownership rights “Now, if anything happens to my husband, my rights will be protected. I couldn’t hope for a greater blessing.”