Bold and transformative innovation for a more sustainable global agriculture 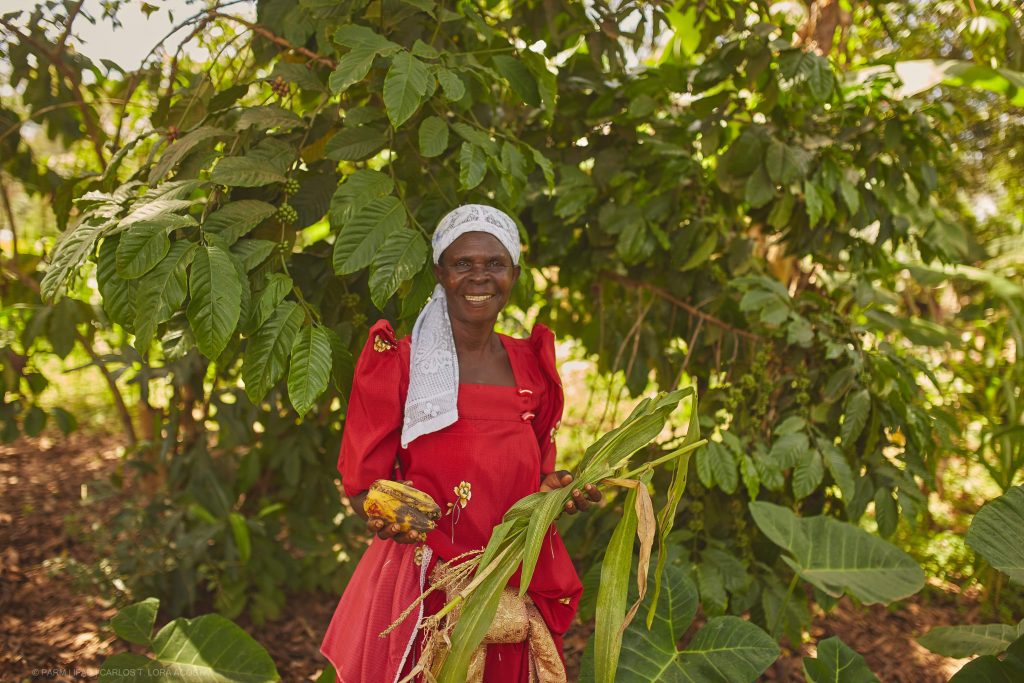 Farmers, fishers, ranchers and food producers are facing the challenge of producing enough food and agricultural products to meet the needs of growing populations while protecting the natural resource base on which agriculture depends for both current and future production.  Bold and transformational innovation is one of the only ways to meet these challenges sustainably in both developed and developing countries.

This interactive webinar is intended to provide inspiration for innovation actors and decision-makers, globally, to unlock the potential of innovation to improve agricultural and food system sustainability in all three dimensions – social, economic and environmental.

The session is co-hosted by the Food and Agriculture Organization of the United Nations, the U.S. Department of Agriculture and the U.S. Mission to the UN Agencies in Rome.

FAO will address the need for increased innovation, science and technology in a time of rising hunger, highlighting the role of the private sector in promoting these imperatives. USDA will discuss its Agriculture Innovation Agenda and Science Blueprint, and how these initiatives fit into the context of feeding the world with finite resources. Mars Incorporated will provide an industry perspective on these efforts and discuss its priorities for fostering more resilient agriculture and food systems.

Register to join the webinar.

Join the conversation on Twitter using #AgInnovation during the event.

Mr Sharan has worked with the Indian Government extensively in rural and tribal areas of Maharashtra and has also been actively involved in agriculture and food policy formulation working with the Ministry of Agriculture and Farmers Welfare in New Delhi. He comes to Washington from his previous posting as Permanent Representative of India to the Rome based UN Agencies where he served as the Vice President of the Word Food Programme (WFP) Executive Board, Chairman of International Fund for Agricultural Development (IFAD) Evaluation Committee, Asia Group representative on FAO Programme Committee, and a member of the FAO Council.

Beth Bechdol is Deputy Director-General at the Food and Agriculture Organization of the United Nations (FAO). In this role, she continues her service to food and agriculture – now on a global scale. Ms Bechdol is responsible for overseeing FAO’s technical cooperation and programme support, including resource mobilization, partnerships, South-South and Triangular Cooperation, as well as leading programmes in the area of plant protection and production. Before joining FAO, Ms Bechdol was President and CEO of AgriNovus Indiana, the Midwestern state’s economic development initiative focused on advancing the agbioscience sector and developing 21st century talent. Prior to her leadership of AgriNovus, Ms Bechdol was Director of agribusiness strategies at Indianapolis-based law firm Ice Miller LLP where she helped build the firm’s dedicated legal practice to food and agribusiness clients. She also was the former Deputy Director of the Indiana State Department of Agriculture. Ms Bechdol’s dedication to public service in agriculture and her extensive trade and farm policy experience started in Washington, D.C. where she served in key roles as Chief of Staff at the U.S. Department of Agriculture, and as Economist on the Senate Agriculture Committee. She began her career in the Washington office of Informa Economics. As the first female Vice President in the firm, she assisted clients in understanding critical food and agriculture issues such as global trade negotiations, federal farm policy, technology advancements, farm structure, risk management tools, among other major trends. She also provided market information expertise to several international development projects in Egypt, the Republic of North Macedonia and Ukraine. Ms Bechdol excels at building unconventional alliances and connecting people. She has had significant roles on boards and commissions, including the National FFA Board of Trustees, the Purdue Research Foundation and the Farm Foundation Round Table. Ms Bechdol was raised on a multi-generation family grain farm in rural Indiana. She received her bachelor’s degree from Georgetown University in international law and international affairs, and completed her master’s degree at Purdue University in agricultural economics.

Mr. Censky is the Deputy Secretary for the U.S. Department of Agriculture. He was sworn-in on October 11, 2017 after being unanimously confirmed by the Senate. Mr. Censky previously served for the past 21 years as CEO of the American Soybean Association, a national, not-for-profit trade association that represents United States soybean farmers on policy and trade. Mr. Censky began his career working as a legislative assistant for Senator Jim Abdnor (R-SD). Later he served in both the Reagan and George H. W. Bush Administrations at the U.S. Department of Agriculture, eventually serving as Administrator of the Foreign Agricultural Service where he was involved in running our nation’s export programs. Mr. Censky received his B.S. in Agriculture from South Dakota State University and his Postgraduate Diploma in Agriculture Science from the University of Melbourne, Australia. He grew up on a soybean, corn, and diversified livestock farm near Jackson, Minnesota. He and his wife Carmen have two daughters.

Dr. Scott Hutchins is the Deputy Under Secretary for the U.S. Department of Agriculture’s Research, Education, and Economics mission area which is comprised of the Agricultural Research Service, Economic Research Service, National Agricultural Statistics Service, and the National Institute of Food and Agriculture. Together these agencies cut across every USDA department and have unique federal leadership responsibility to advance agricultural research, extension, and education.

Dr. Hutchins was sworn-in by Secretary Perdue on January 29, 2019.  After nearly 32 years, he retired from CortevaTM AgriScience where he held many roles in Program Management, Human Resources, Six Sigma, R&D Portfolio Management, and Global Administration. In addition, he is a Board-Certified Entomologist, Adjunct Professor of entomology at the University of Nebraska-Lincoln, Past President of the Entomological Society of America (ESA), and Fellow of the ESA.

Mr Bukar Tijani was the FAO Assistant Director-General and Regional Representative for Africa, from December 2013 to October 2018. From November 2018 he assumed office as FAO Assistant Director-General of the Agriculture and Consumer Protection Department. He started his professional career in 1978 as a Rural Agricultural Extension Worker. After his National Service with the Kano Agricultural and Rural Development Authority in the mid-1980s, he collaborated with IITA, Ibadan, on on-farm adaptive research for small-holder farms on rice, maize, cowpea, soybean and farming systems, which led to adoption of varieties utilized by farmers up to present day in Nigeria. He held senior positions in a number of the institutions under the State and at national levels. These included General Manager of Fertilizer Blending Company, Director in an EC-assisted Programme, North-East Arid Zone Development Programme (NEAZDP), National Programme Coordinator for IFAD-assisted Community-Based Agriculture and Rural Development Programme (IFAD-CBARDP) and National Project Coordinator for the Third Fadama Development Project assisted by the World Bank in Nigeria. He had extensive experience on participatory Community driven agriculture and rural development approaches across Nigeria. He coordinated all donor-assisted AfDB, IsDB, BADEA, IFAD and World Bank programmes and projects including the National Programme for Food Security (NPFS) and the FAO-China-Nigeria tripartite agreement on South-South Cooperation. From July 2011 to September 2013, Mr. Tijani was a Cabinet Minister of the Federal Republic of Nigeria where he served as the Minister of State for Agriculture and Rural Development.

His academic career spanned 15 years. Shapiro is a Senior Fellow at UC Davis, College of Agriculture and Environmental Sciences, a former Fulbright Scholar, Ford Foundation Fellow, in 2007 Howard was made a Distinguished Fellow of the World Agroforestry Centre and authored the IAASTD chapter on Biotechnology and Biodiversity. co-chair of the 1st and 2nd World Congress of Agroforestry and served as Chairperson of the External Advisory Board of the Agriculture Sustainability Institute at UC Davis. In 2009 he was named recipient of The Award of Distinction from The College of Agriculture and Environmental Sciences, UC Davis. He led the global effort sequencing, assembling and annotating the Theobroma cacao genome, and initiated the Arachis genome.

Shapiro founded the African Orphan Crops Consortium (AOCC) and the African Plant Breeding Academy (AfPBA) in 2011. The effort will sequence, assemble and annotate 101 key food cultivars, which are the backbone of African nutrition. In October of 2017 he launched with collaborators the Foldit Aflatoxin Puzzle with 460,000 gamers to redesign and improve enzymes to degrade the aflatoxin.

Kip Tom is the United States Permanent Representative to the United Nations Agencies for Food and Agriculture in Rome, with the Rank of Ambassador.  Ambassador Tom was confirmed by the U.S. Senate on April 11, 2019.

Ambassador Tom is an agribusiness leader who transformed a seventh-generation farm into one of the largest commodity businesses in the Midwestern United States, while launching international operations and deploying new technologies.  Ambassador Tom grew up on his family’s farm in the community that his ancestors homesteaded in 1837.  His business has grown to over 25,000 acres with locations in the U.S. and in Argentina.

Ambassador Tom served as a member of the board of the Indiana Economic Development Corporation.  He is involved in several philanthropic organizations focusing on food security and development issues domestically and globally.  He is also active in supporting the next generations of farmers, having served as a trustee of the National 4-H Foundation and a member of the National Future Farmers of America Foundation Board of Directors.  Ambassador Tom holds an advanced management certificate from Texas A&M in agriculture economics.

Thomas Pesek has over fifteen years of experience in sustainable agriculture and food security, resource mobilization, partnership-brokering, development finance, advocacy and external liaison. He joined FAO in September 2017 after having worked at IFAD for 12 years. Prior to that he worked for WFP and at UN Headquarters in New York.