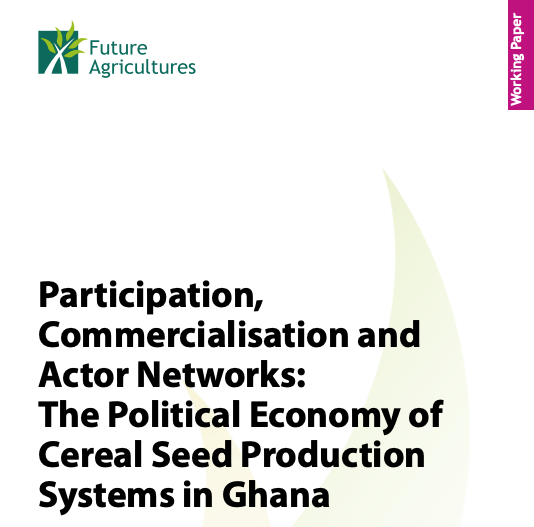 This FAC Working Paper is part of the first phase of a collaborative research project of the Science, Technology and Innovation (STI) Theme of the Future Agricultures Consortium (FAC). It was funded through a grant from the UK Department for International Development (DFID). The project explored the political economy of cereal seed systems across five distinct country contexts – Ethiopia, Kenya, Malawi, Ghana and Zimbabwe – during 2009-10. This paper examines the changing framework of cereal seed policy in Ghana from a state-led public sector service in the 1960s to a commercial sector activity in the 2000s, and the implications of these changes. The work argues that attempts to privatise seeds during the 1980s and 1990s under structural adjustment were not very successful since private sector investors were unwilling to invest in the poorly developed seed sector. Subsequent interventions have built networks of civil society organisations working in conjunction with private and public partnerships to create a social, economic and knowledge infrastructure for the emergence of private seed markets.

Keywords: markets, Policy, Private Sector, public sector, seed production, Seeds
We use cookies to ensure that we give you the best experience on our website. If you continue to use this site we will assume that you are happy with it.Ok