Can Agro-Dealers Deliver the Green Revolution in Kenya? 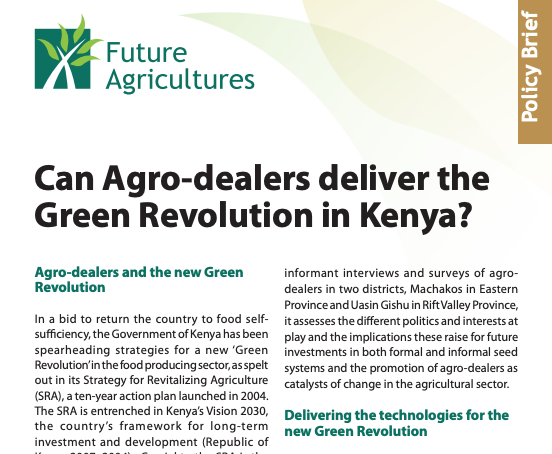 In a bid to return the country to food self-sufficiency, the Government of Kenya has been spearheading strategies for a new ‘Green Revolution’ in the food producing sector, as spelt out in its Strategy for Revitalizing Agriculture (SRA), a ten-year action plan launched in 2004. Crucial to the SRA is the increased generation, promotion, and use of modern farming inputs and technologies, particularly improved seed and fertilizer. Smallscale independent stockists or input distributors, commonly known as ‘agro-dealers’, are seen to have a crucial role to play in distributing these inputs in a liberalised economy. As key actors in the Green Revolution agenda, agro-dealers are thus at the center of current policy debates about the future of Kenya’s seed system. This FAC Policy Brief sheds light on the rise of agro-dealers in recent national policy debates as central figures in the delivery of agricultural innovation, improved food security and the potential spark in igniting a smallholder-led revolution. It asks: can agro-dealers really deliver the Green Revolution in Kenya? Drawing on key informant interviews and surveys of agro-dealers in two districts, Machakos in Eastern Province and Uasin Gishu in Rift Valley Province, it assesses the different politics and interests at play and the implications these raise for future investments in both formal and informal seed systems and the promotion of agro-dealers as catalysts of change in the agricultural sector.

Keywords: agricultural inputs, Agricultural Policy, Policy
We use cookies to ensure that we give you the best experience on our website. If you continue to use this site we will assume that you are happy with it.Ok