Variation in transpiration efficiency and its related traits in a groundnut (Arachis hypogaea L.) mapping population 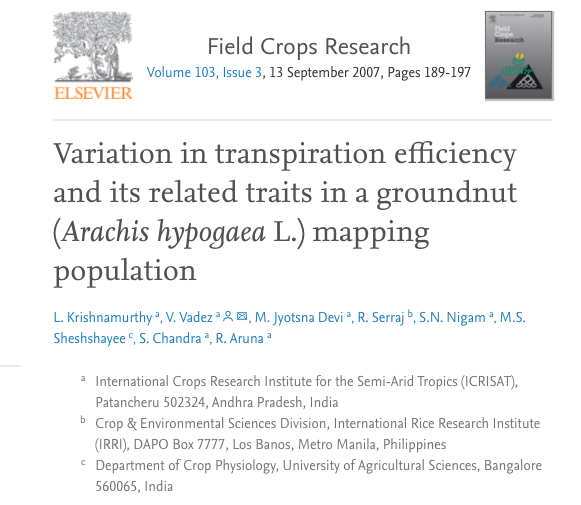 Transpiration efficiency (TE) has been recognized as an important source of yield variation under drought stress in groundnut. Here the variation for TE is evaluated in a set of 318 recombinant inbred lines (RILs) of groundnut at F8 generation, derived from a cross between a high TE (ICGV 86031) and a low TE (TAG 24) parent, and the value of specific leaf area (SLA), SPAD chlorophyll meter readings (SCMR) and carbon isotope discrimination (?13C) as surrogates of TE are measured. Transpiration efficiency was measured gravimetrically in the 318 RILs and parents under progressive soil drying in a pot culture in two post-rainy seasons. Large and consistent variation for TE existed among the RILs across years. The overall distribution of TE among the RILs indicated that TE was governed by dominant and additive genes. Surrogates SLA and SCMR, were measured prior, during and after completion of the drought period, whereas ?13C was measured on the dried tissue after harvest. Transpiration efficiency was negatively associated with SLA after the completion of stress treatment (r2 = 0.15) and 13C in leaves (r2 = 0.13) and positively associated with SCMR during stress (r2 = 0.17). These associations, all fairly weak, were significant only in 2004. None of these relationships was found in 2005. Although the heritability of SCMR during 2005 was relatively higher than that of TE, and although SCMR has previously been used to identify contrasting germplasm for TE, the stress-dependence of the relationship with TE, and the poor regression coefficients (r2) with that RIL population, do not confer that these surrogates are adequately robust enough in that population. Though more time consuming, a direct gravimetric evaluation for TE appeared to be more reliable.

Keywords: agriculture, Arachis hypogaea, Drought, genetics, groundnuts, Plant Breeding, transpiration
We use cookies to ensure that we give you the best experience on our website. If you continue to use this site we will assume that you are happy with it.Ok