Variation in the Fusarium section Liseola: pathogenicity and genetic studies of isolates of Fusarium moniliforme Sheldon from different hosts in Ghana 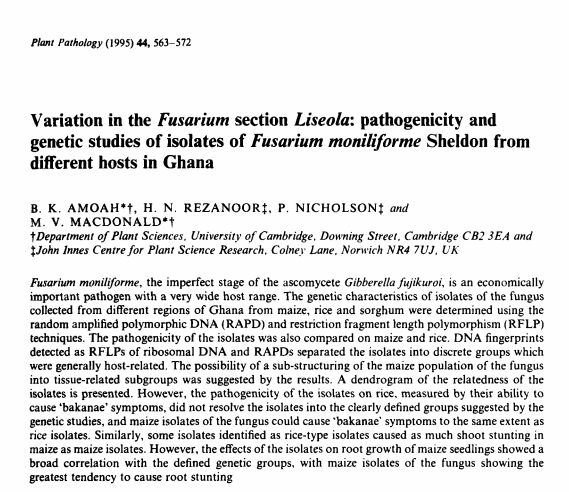 Fusarium moniliforme, the imperfect stage of the ascomycete Gibberella fujikuroi, is an economically important pathogen with a very wide host range. The genetic characteristics of isolates of the fungus collected from different regions of Ghana from maize, rice and sorghum were determined using the random amplified polymorphic DNA (RAPD) and restriction fragment length polymorphism (RFLP) techniques. The pathogenicity of the isolates was also compared on maize and rice. DNA fingerprints detected as RFLPs of ribosomal DNA and RAPDs separated the isolates into discrete groups which were generally host-related. The possibility of a sub-structuring of the maize population of the fungus into tissue-related subgroups was suggested by the results. A dendrogram of the relatedness of the isolates is presented. However, the pathogenicity of the isolates on rice, measured by their ability to cause “bakanae” symptoms, did not resolve the isolates into the clearly defined groups suggested by the genetic studies, and maize isolates of the fungus could cause “bakanae” symptoms to the same extent as rice isolates. Similarly, some isolates identified as rice-type isolates caused as much shoot stunting in maize as maize isolates. However, the effects of the isolates on root growth of maize seedlings showed a broad correlation with the defined genetic groups, with maize isolates of the fungus showing the greatest tendency to cause root stunting.

Keywords: agriculture, Fusarium moniliforme, plant diseases, plant pathogenic fungi
We use cookies to ensure that we give you the best experience on our website. If you continue to use this site we will assume that you are happy with it.Ok