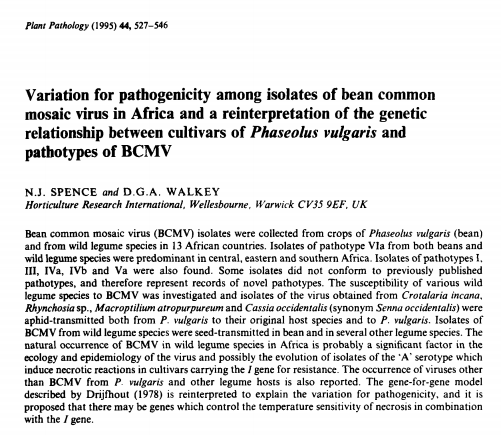 Bean common mosaic virus (BCMV) isolates were collected from crops of Phaseolus vulgaris (bean) and from wild legume species in 13 African countries. Isolates of pathotype VIa from both beans and wild legume species were predominant in central, eastern and southern Africa. Isolates of pathotypes I, III, IVa, IVb and Va were also found. Some isolates did not conform to previously published pathotypes, and therefore represent records of novel pathotypes. The susceptibility of various wild legume species to BCMV was investigated and isolates of the virus obtained from Crotalaria incana, Rhynchosia sp., Macroptilium atropurpureum and Cassia occidentalis (synonym Senna occidentalis) were aphid-transmitted both from P. vulgaris to their original host species and to P. vulgaris. Isolates of BCMV from wild legume species were seed-transmitted in bean and in several other legume species. The natural occurrence of BCMV in wild legume species in Africa is probably a significant factor in the ecology and epidemiology of the virus and possibly the evolution of isolates of the “A” serotype which induce necrotic reactions in cultivars carrying the I gene for resistance. The occurrence of viruses other than BCMV from P. vulgaris and other legume hosts is also reported. The gene-for-gene model described by Drijfhout (1978) is reinterpreted to explain the variation for pathogenicity, and it is proposed that there may be genes which control the temperature sensitivity of necrosis in combination with the I gene.

Keywords: agriculture, Bean common mosaic virus, crops, legumes, Phaseolus vulgaris, plant diseases
We use cookies to ensure that we give you the best experience on our website. If you continue to use this site we will assume that you are happy with it.Ok