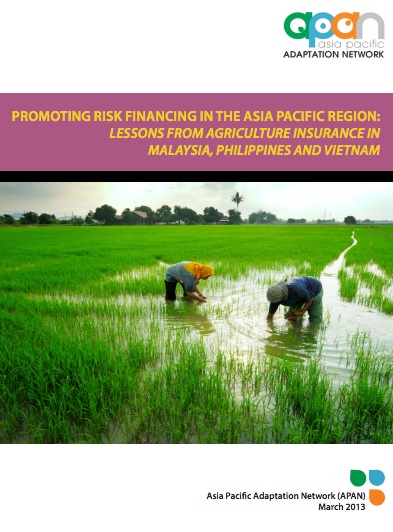 There is a growing consensus among development community that the risk insurance can provide an effective risk management tool for mitigating the impacts of climatic and non-climatic disasters. Several risk insurance initiatives have been implemented at grassroots level for reducing the vulnerability of communities to disasters in most of the countries in Asia and the Pacific over the years. Despite these grassroots efforts, the penetration of risk insurance is poor in the developing Asia Pacific compared to many developed countries in the region due to several barriers that this sector is facing. Keeping this in view, this reconnaissance study was carried out to assess the benefits accrued through community level risk insurance experiences in some of the developing countries, evaluate barriers limiting the penetration of crop insurance, and identify interventions for greater risk insurance penetration leading to climate change adaptation and disaster risk reduction.

It is evident from the study that the countries are at different levels of developing agriculture insurance programs and institutional mechanisms with Philippines at the fore front followed by Vietnam and Malaysia. The growing disaster losses and related burden on government has been the clear driver of insurance in all the study countries. Though Malaysia has long experience of implementing insurance for industrial crops, the insurance has entered into agriculture only very recently with the promulgation of the new government crop insurance program. Being an early bird, one could find a diverse insurance approaches in Philippines mostly spearheaded by the public insurance institutions with strong public-private partnership. The government of Vietnam showed a constant spirit of making insurance work in the country with one of the longest unsuccessful history with agriculture insurance.

Keywords: Agricultural Insurance, Climate Change, Malaysia, risk mitigation, Vietnam
We use cookies to ensure that we give you the best experience on our website. If you continue to use this site we will assume that you are happy with it.Ok