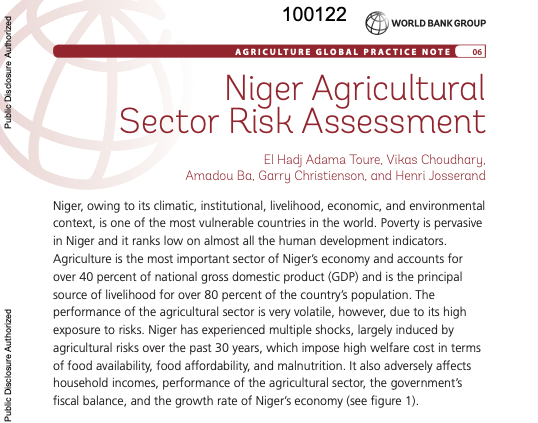 Niger, owing to its climatic, institutional, livelihood, economic, and environmental context, is one of the most vulnerable countries in the world. Poverty is pervasive in Niger and it ranks low on almost all the human development indicators. Agriculture is the most important sector of Niger’s economy and accounts for over 40 percent of national gross domestic product (GDP) and is the principal source of livelihood for over 80 percent of the country’s population. The performance of the agricultural sector is very volatile, however, due to its high exposure to risks. Niger has experienced multiple shocks, largely induced by agricultural risks over the past 30 years, which impose high welfare costs in terms of food availability, food affordability, and malnutrition. It also adversely affects household incomes, the performance of the agricultural sector, the government’s fiscal balance, and the growth rate of Niger’s economy.

Keywords: Agricultural Risk Management, Climate Change, Drought, Niger, PAGRA
We use cookies to ensure that we give you the best experience on our website. If you continue to use this site we will assume that you are happy with it.Ok