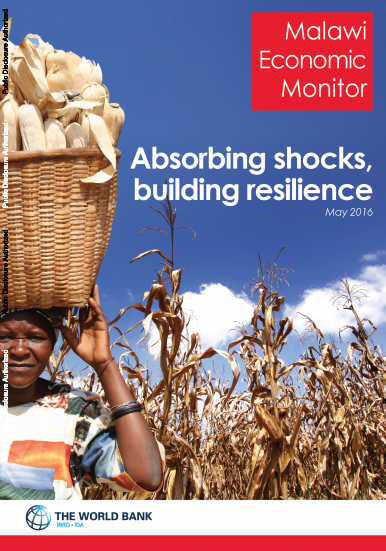 Droughts and floods during the past two seasons have slowed Malawi’s economic growth and made millions of people dependent on support to meet their basic food needs, exposing the country’s vulnerability to agricultural risks. But Malawi can set its economy on a better growth path. On June 29, the third edition of the World Bank’s Malawi Economic Monitor (MEM): Absorbing shocks, building resilience, was launched in Lilongwe with a special focus section on investing in agricultural resilience. The Special Focus Section draws largely from the World Bank’s Agricultural Sector Risk Assessments conducted in 2014-15 and describes how agricultural risks have affected Malawi over the past decades. Malawi is currently suffering the second consecutive year of poor harvests due to the effects of a drought that is sweeping Southern Africa. The poor harvests are having serious impacts on the economy and on food security. About 2.8 million people are currently in need of humanitarian aid in Malawi – a figure that may rise to as many as 6.5 million people before the next maize harvest.

Keywords: agriculture, Climate Change, resilience
We use cookies to ensure that we give you the best experience on our website. If you continue to use this site we will assume that you are happy with it.Ok