Making smallholder agricultural production work: What we can learn from the socioeconomic and agrarian transformation through agro-well access in the North Central Province of Sri Lanka 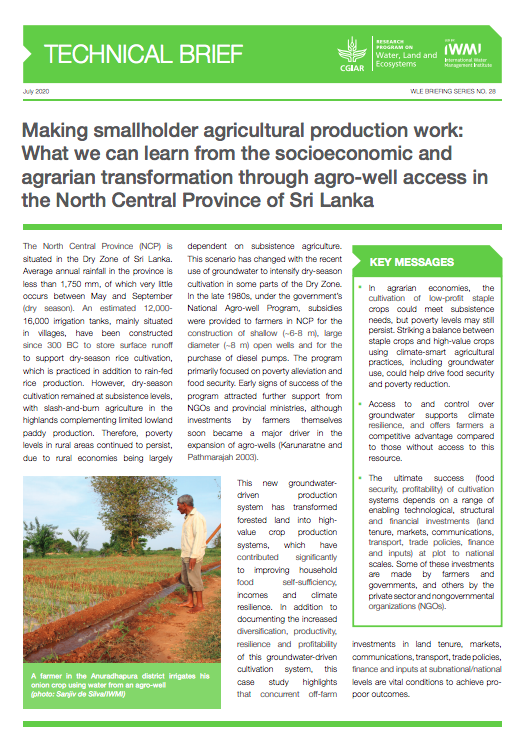 The North Central Province (NCP) is situated in the Dry Zone of Sri Lanka. Average annual rainfall in the province is less than 1,750 mm, of which very little occurs between May and September (dry season). An estimated 12,00016,000 irrigation tanks, mainly situated in villages, have been constructed since 300 BC to store surface runoff to support dry-season rice cultivation, which is practiced in addition to rain-fed rice production. However, dry-season cultivation remained at subsistence levels, with slash-and-burn agriculture in the highlands complementing limited lowland paddy production. Therefore, poverty levels in rural areas continued to persist, due to rural economies being largely dependent on subsistence agriculture. This scenario has changed with the recent use of groundwater to intensify dry-season cultivation in some parts of the Dry Zone. In the late 1980s, under the government’s National Agro-well Program, subsidies were provided to farmers in NCP for the construction of shallow (~6-8 m), large diameter (~8 m) open wells and for the purchase of diesel pumps. The program primarily focused on poverty alleviation and food security. Early signs of success of the program attracted further support from NGOs and provincial ministries, although investments by farmers themselves soon became a major driver in the expansion of agro-wells (Karunaratne and Pathmarajah 2003). This new groundwater driven production system has transformed forested land into high-value crop production systems, which have contributed significantly to improving household food self-sufficiency, incomes and climate resilience. In addition to documenting the increased diversification, productivity, resilience and profitability of this groundwater-driven cultivation system, this case study highlights that concurrent off-farm investments in land tenure, markets, communications, transport, trade policies, finance and inputs at subnational/national levels are vital conditions to achieve pro-poor outcomes.

Keywords: Agricultural Production
We use cookies to ensure that we give you the best experience on our website. If you continue to use this site we will assume that you are happy with it.Ok