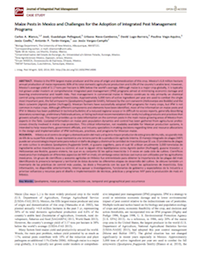 Mexico is the fifth largest maize producer and the area of origin and domestication of this crop. Mexico’s 6.8 million hectare annual production of maize represents 30% of its total domestic agricultural production and 6.6% of the country’s arable land. However, Mexico’s average yield of 3.17 tons per hectare is 38% below the world’s average. Although maize is a major crop globally, it is typically not grown under modern or comprehensive integrated pest management (IPM) programs aimed at minimizing economic damage and lowering environmental and health risks. Pest management in commercial maize in Mexico continues to rely primarily on chemical control using conventional synthetic insecticides. Approximately 3,000 tons of active ingredient per year are used to combat the single most important pest, the fall armyworm (Spodoptera frugiperda Smith), followed by the corn earworm (Helicoverpa zea Boddie) and the black cutworm (Agrotis ipsilon (Hufnagel)). Mexican farmers have successfully adopted IPM programs for many crops, but IPM is not common in maize crops. Although different components and elements have been identified, most of the information on maize pests and IPM in Mexico has been published in technical bulletins of a reduced regional scope or in difficult-to-access reports, generally describing laboratory screenings, preliminary field evaluations, or listing technical recommendations but rarely including products and practices that growers actually use. This report provides up-to-date information on the common pests in the main maize-growing areas of Mexico from experts in the field. Updated information on maize pest population dynamics and control has been gathered from agricultural professionals directly involved in maize crop protection. This critical information, not readably available for Mexican production systems, is intended to help researchers, government officials, and industry specialists in making decisions regarding time and resource allocations in the design and implementation of IPM techniques, practices, and programs for Mexican maize.

Keywords: insect pests, Integrated Pest Management, IPM (integrated pest management), Maize
We use cookies to ensure that we give you the best experience on our website. If you continue to use this site we will assume that you are happy with it.Ok