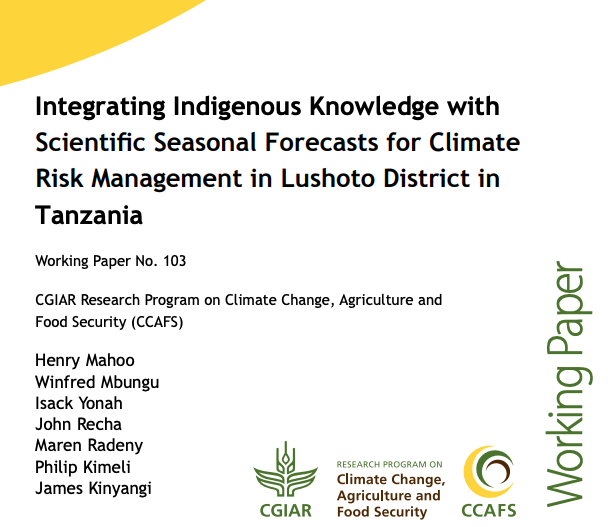 This study identifies and documents existing indigenous knowledge (IK) in weather forecasting in the Lushoto district, northern Tanzania, and aims at promoting the integration of IK and scientific weather forecasting for climate risk management. Historical rainfall data was used in combination with data collected through household surveys, focus group discussions and key informant interviews. The majority of the farmers (56%) indicated that weather forecasts using IK were more reliable and specific to their location compared to scientific forecasts. A comparison was made of the seasonal March-April-May (MAM) forecasts in 2012 from IK and Tanzania Meteorological Agency (TMA), with both approaches predicting a normal rainy season. The IK forecasts were, however, more reliable in the long rainy MAM season compared to the short rainy October-November- December season. To improve accuracy, systematic documentation of IK and establishment of a framework for integrating IK and TMA weather forecasting is needed. There is also a need to establish an information dissemination network and entrench weather forecasting within the District Agricultural Development Programmes.

Keywords: climate risk management, indigenous knowledge, seasonal forecasts
We use cookies to ensure that we give you the best experience on our website. If you continue to use this site we will assume that you are happy with it.Ok