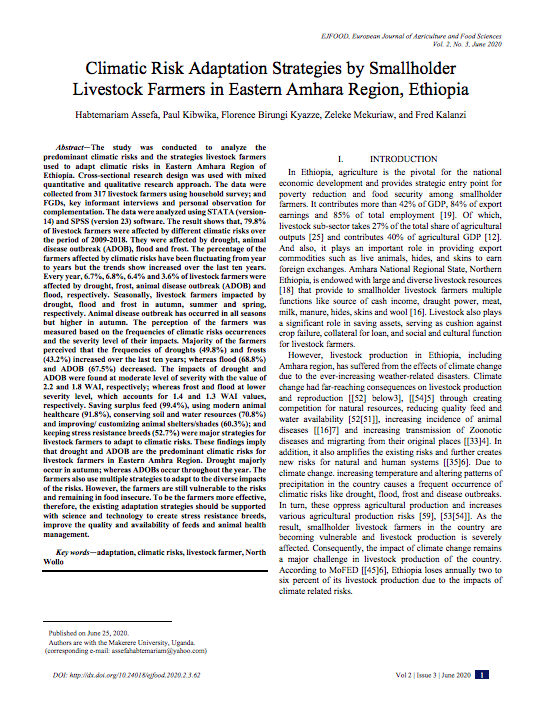 The study was conducted to analyze the predominant climatic risks and the strategies livestock farmers used to adapt climatic risks in Eastern Amhara Region of Ethiopia. Cross-sectional research design was used with mixed quantitative and qualitative research approach. The data were collected from 317 livestock farmers using household survey; and FGDs, key informant interviews and personal observation for complementation. The data were analyzed using STATA (version-14) and SPSS (version 23) software. The result shows that, 79.8% of livestock farmers were affected by different climatic risks over the period of 2009-2018. They were affected by drought, animal disease outbreak (ADOB), flood and frost. The percentage of the farmers affected by climatic risks have been fluctuating from year to years but the trends show increased over the last ten years. Every year, 6.7%, 6.8%, 6.4% and 3.6% of livestock farmers were affected by drought, frost, animal disease outbreak (ADOB) and flood, respectively. Seasonally, livestock farmers impacted by drought, flood and frost in autumn, summer and spring, respectively. Animal disease outbreak has occurred in all seasons but higher in autumn. The perception of the farmers was measured based on the frequencies of climatic risks occurrences and the severity level of their impacts. Majority of the farmers perceived that the frequencies of droughts (49.8%) and frosts (43.2%) increased over the last ten years; whereas flood (68.8%) and ADOB (67.5%) decreased. The impacts of drought and ADOB were found at moderate level of severity with the value of 2.2 and 1.8 WAI, respectively; whereas frost and flood at lower severity level, which accounts for 1.4 and 1.3 WAI values, respectively. Saving surplus feed (99.4%), using modern animal healthcare (91.8%), conserving soil and water resources (70.8%) and improving/ customizing animal shelters/shades (60.3%); and keeping stress resistance breeds (52.7%) were major strategies for livestock farmers to adapt to climatic risks. These findings imply that drought and ADOB are the predominant climatic risks for livestock farmers in Eastern Amhra Region. Drought majorly occur in autumn; whereas ADOBs occur throughout the year. The farmers also use multiple strategies to adapt to the diverse impacts of the risks. However, the farmers are still vulnerable to the risks and remaining in food insecure. To be the farmers more effective, therefore, the existing adaptation strategies should be supported with science and technology to create stress resistance breeds, improve the quality and availability of feeds and animal health management.

Keywords: Climate adaptation
We use cookies to ensure that we give you the best experience on our website. If you continue to use this site we will assume that you are happy with it.Ok