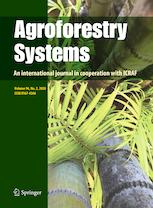 A study was undertaken to assess the potential of bamboo-based agroforestry system to enhance productivity and economic returns at the research farm of ICAR-Central Agroforestry Research Institute, Jhansi (Uttar Pradesh), India, which lies in the Bundelkhand region of central India. The 7-year study (2007–2015) recorded 2906 number of bamboo culms ha−1 at 10 m × 10 m spacing compared to 2409 culms under 12 m × 10 m spacing. Averaged over 3 years (5th, 6th and 7th year), bamboo culm yield from agroforestry (Dendrocalamus strictus + Sesamum indicum–Cicer arietinum)/(bamboo + sesame–chickpea) was higher by 3.20 and 4.96% over sole bamboo in 12 m × 10 m and 10 m × 10 m, respectively.

Financial analysis showed that bamboo-based agroforestry system (bamboo + sesame–chickpea) planted at 12 m × 10m spacing was having high land equivalent ratio (1.95–2.14) and was more profitable than arable cropping and sole bamboo. Therefore, the Dendrocalamus strictus-based agroforestry system can be a potential alternative to arable cropping in semi-arid tropics of central India to enhance productivity and economic returns.

Keywords: Agroforestry
We use cookies to ensure that we give you the best experience on our website. If you continue to use this site we will assume that you are happy with it.Ok