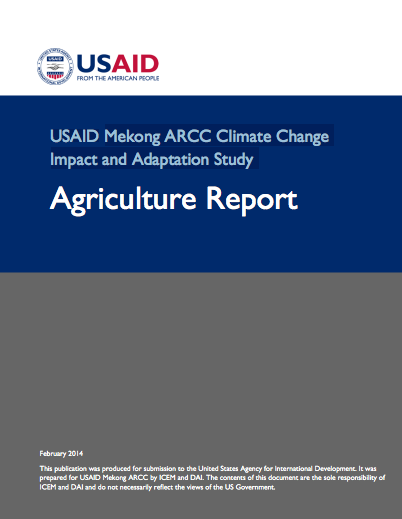 Growing conditions for agriculture are diverse in the Lower Mekong Basin (LMB), from the mountainous areas of Lao PDR and the Central Highlands in Vietnam to the lowland plains in the Mekong Delta. Farming systems range from traditional shifting agriculture systems dominated by upland rice through industrial plantations, including smallholder intensive rice farmers. Rainfed agriculture is the dominant type of agriculture in the LMB. Rainfed rice is the dominant crop, representing 75% of the agricultural area within the LMB. Other commercial crops such as maize, soybean, or cassava, which have growing importance in farming systems in the region, are mostly rainfed. Therefore, agriculture, a key sector of the economy within the LMB, is highly dependent on climate and especially on rainfall frequency and distribution. With more than 1,000 mm of rainfall per year in the LMB, water shortage is not the primary constraint for agriculture. Instead, it is the un-predictability and variability of rainfall distribution during the rainy season that can lead to drought, water stress, and low yields.

Keywords: Climate Change, USAID, Viet Nam and Mekong Delta
We use cookies to ensure that we give you the best experience on our website. If you continue to use this site we will assume that you are happy with it.Ok