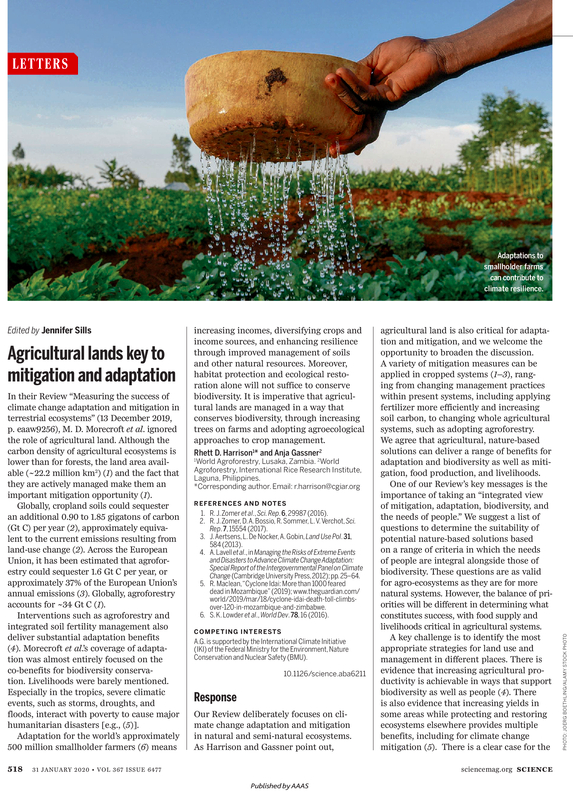 In their Review “Measuring the success of climate change adaptation and mitigation in terrestrial ecosystems” (13 December 2019, p. eaaw9256), M. D. Morecroft et al. ignored the role of agricultural land. Although the carbon density of agricultural ecosystems is lower than for forests, the land area available (∼22.2 million km2) (1) and the fact that they are actively managed make them an important mitigation opportunity (1). Globally, cropland soils could sequester an additional 0.90 to 1.85 gigatons of carbon (Gt C) per year (2), approximately equivalent to the current emissions resulting from land-use change (2). Across the European Union, it has been estimated that agroforestry could sequester 1.6 Gt C per year, or approximately 37% of the European Un ion’s annual emissions (3). Globally, agroforestry accounts for ∼34 Gt C (1). Interventions such as agroforestry and integrated soil fertility management also deliver substantial adaptation benefits (4). Morecroft et al.’s coverage of adaptation was almost entirely focused on the co-benefits for biodiversity conservation. Livelihoods were barely mentioned. Especially in the tropics, severe climatic events, such as storms, droughts, and floods, interact with poverty to cause major humanitarian disasters [e.g., (5)]. Adaptation for the world’s approximately 500 million smallholder farmers (6) means increasing incomes, diversifying crops and income sources, and enhancing resilience through improved management of soils and other natural resources. Moreover, habitat protection and ecological restoration alone will not suffice to conserve biodiversity. It is imperative that agricultural lands are managed in a way that conserves biodiversity, through increasing trees on farms and adopting agroecological approaches to crop management.

Keywords: agricultural land, Climate Change
We use cookies to ensure that we give you the best experience on our website. If you continue to use this site we will assume that you are happy with it.Ok