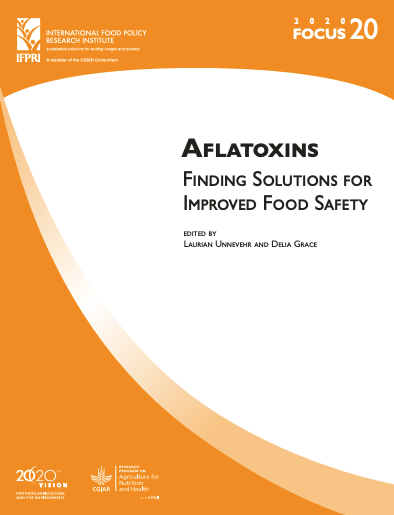 Aflatoxins are a naturally occurring carcinogenic byproduct of common fungi on grains and other crops, particularly maize and groundnuts. They pose a significant public health risk in many tropical developing countries and are also a barrier to the growth of domestic and international commercial markets for food and feed. In recent years the aflatoxin problem has garnered greatly increased attention from both policy and donor communities around the globe.

What can be done to reduce the detrimental impacts of aflatoxins? Because growth of the molds that produce aflatoxins is caused by multiple factors, and because they must be controlled along the entire value chain from production to consumption, only a robust multifaceted approach to controlling aflatoxins is likely to be effective.

The nineteen briefs in this set thus provide different perspectives on aflatoxin risks and solutions. The analyses fall under four broad themes: (1) what is known about the health risks from aflatoxins; (2) how to overcome market constraints to improved aflatoxin control by building new market channels and incentives; (3) what is the international policy context for taking action in developing countries; and (4) what is the state of research on new aflatoxin control technologies, including new methods for aflatoxin detection, crop breeding, biological control, food storage and handling, and postharvest mitigation.

Keywords: aflatoxin, aflatoxin contamination, projects
We use cookies to ensure that we give you the best experience on our website. If you continue to use this site we will assume that you are happy with it.Ok