Aflatoxin control strategies in the groundnut value chain in Ghana 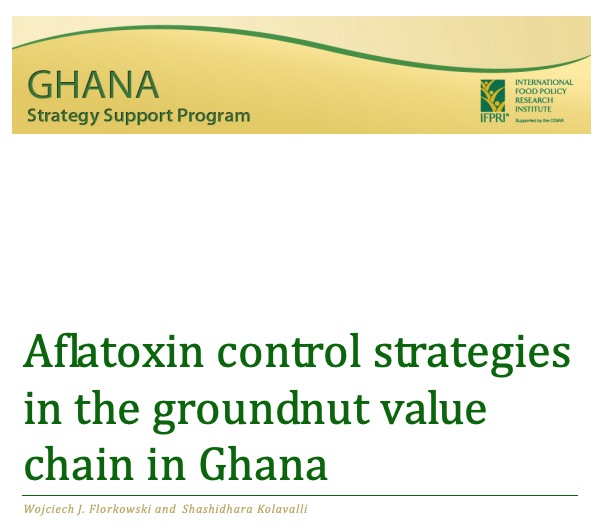 Groundnut is an important cash crop in Ghana and an essential component of the diet of many Ghanaians. It is grown throughout the country but is most important in the two regions of the north, Northern and Upper East, where about a fifth of farmers name groundnut as one of their two most important crops (Ghana Statistical Service 2011). The production of groundnut has tripled between 1995 and 2005 (Yaw et al. 2008). In 2009, Ghanaian farmers produced 495,000 metric tonnes of groundnuts on 346,900 ha (Ghana Statistical Service 2011).

Groundnuts are frequently contaminated by aflatoxin, the secondary metabolite of Aspergillus species of fungus. Aflatoxin suppresses the immune system of humans and animals. It makes the vulnerable—especially growing children, sick and elderly people—susceptible to other diseases. It stunts growth in children and has been recognized as a cause of liver cancer. Aflatoxin contamination of food crops is a global problem and occurs in various food products (Ibeh et al. 1991), but most commonly through groundnuts and cereals (Bandyopadhyay et al. 2007). Williams et al. (2004) report that, according to WHO, aflatoxin has been confirmed or suspected in having an influence on six of the ten most important health risks in developing countries.

The objective of this paper is to identify strategies to reduce aflatoxin contamination of groundnuts in Ghana in order to enable the development of competitive and safe groundnut-based value-adding enterprises. It examines the quality assurance institutions with oversight on the groundnut value chain and the perceptions and practices of farmers and other agents along that value chain. It also tests for aflatoxin contamination in groundnuts and groundnut products that have received varying degrees of processing.

Keywords: aflatoxin
We use cookies to ensure that we give you the best experience on our website. If you continue to use this site we will assume that you are happy with it.Ok