Increasing salinity from rising sea levels, storm surges and declining river flow, threatens the livelihood of millions of paddy farmers in the Indian Sundarbans and other Asian deltas. Scientists have been developing salt-tolerant rice strains to help farmers since excess salt can retard plant germination and growth. Water harvesting and soil management are also needed to help farmers survive climatic and development pressures.

A decade ago, Manirul Saha grew just one crop a year on his small farm in the Sundarbans, the sea-soaked land some hours south of Kolkata. The 40-something sowed rice before the summer monsoon and reaped the harvest at rains’ end. A second crop was always unreliable: As the water evaporated in the post-monsoon months, more salt would rise to the surface of this coastal land, making the soil saline and retarding plant growth. Saha had to work as a day labourer to survive.

Then, with the help of scientists at the Central Soil Salinity Research Institute (CSSRI), Saha adopted new farming techniques, including the use of improved salt-tolerant rice varieties and water-saving techniques. That allowed him to expand to a second crop.

“I hardly saved anything before,” he said. “Now I’m saving a lakh [rupees] a year.”

Low-lying coastal regions like the Sundarbans, the mangrove-tipped edge of the Ganges-Brahmaputra delta that cradles eastern India and Bangladesh, are under threat from rising seas and more frequent storms, such as the cyclone Amphan that hit the region a few weeks ago. But the climate danger is not just about sudden destruction or gradual submergence. 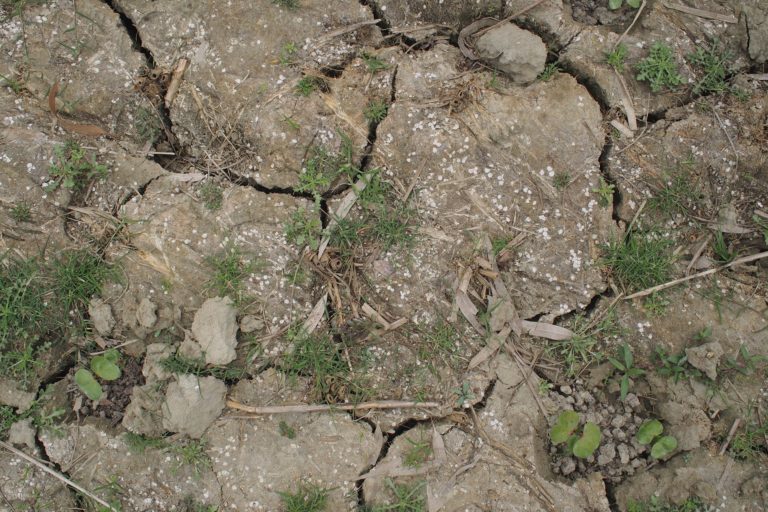 After the monsoon recedes in September and the soil begins to dry, the salt in the land – from groundwater or ingress – begins to rise to the top soil, visible in the small white patches seen here. Soil salinity rises through the winter and peaks around May, making a winter crop difficult to cultivate in parts of the coastal Sundarbans. Photo by Vaishnavi Chandrashekhar.

Salinization of coastal lands threatens the livelihoods of millions of small paddy farmers that live in Asia’s deltas. An estimated 16 to 20 million hectares of coastal land in South and Southeast Asia are already affected by salinity. In India, that figure is 3 million hectares, concentrated in the eastern states of Odisha and West Bengal. Research suggests that, for every unit of increase in salinity above a certain threshold, there is a 12 percent drop in rice yield.

The threat has pushed institutes like CSSRI to develop and disseminate new salt-tolerant rice varieties to help farmers over the recent years, along with improved farming techniques. The largest of these efforts is from the International Rice Research Institute (IRRI), which ran a project for Stress Tolerant Rice for Africa and South Asia from 2007-2019.

According to Abdelbagi M Ismail, principal scientist at IRRI, the multinational effort improved research infrastructure, trained researchers, and helped get 1 million tons of stress-tolerant rice seeds—for salinity, drought, and flood—-produced and distributed to over 30 million farmers in Sub-Saharan Africa and South Asia.

“There is a need for new varieties that have higher tolerance than existing ones as the severity of the problem increases with time,” he said.

India’s CSSRI, meanwhile, has developed 120 stress-tolerant rice varieties in the past decade, 40 of them with higher resistance to salinity. Some are suitable for the monsoon crop, others for the dry season, said Dhiman Burman, head of the CSSRI regional field station at Canning Town in the Sundarbans of West Bengal. There are also different kinds of salt-tolerant seeds for different types of land and rice consumption preferences. Seeds that are tolerant to multiple stressors—salinity as well as drought, for instance—are increasingly necessary, he said. 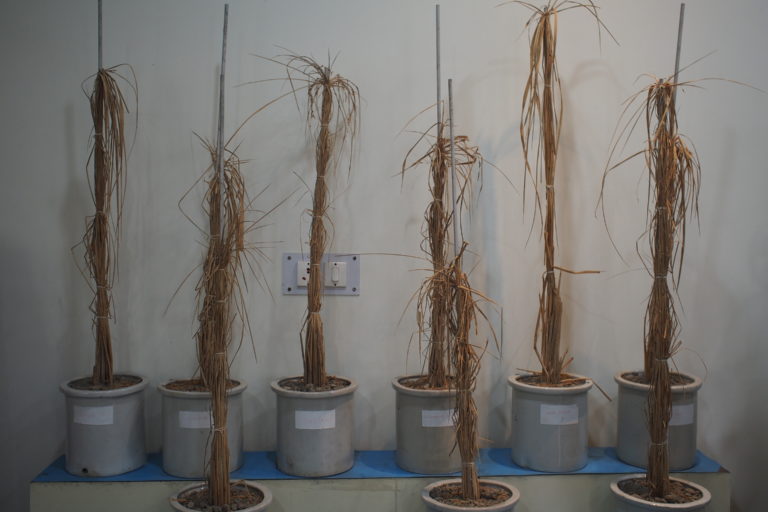 Different rice varieties displayed at the CSSRI field station in Canning in the Sundarbans. Government scientists have developed and tested these varieties for a variety of environmental conditions. Canning 7 (third from right, top row) can tolerate higher salinity levels while Amal Mana (top row, second from right) and Swarna Sub 1 (middle of bottom row) can tolerate many days of flooding. Photo by Vaishnavi Chandrashekhar.

“Salinity usually coexists with other challenges,” agreed IRRI’s Ismaili. “The solution is to develop climate-resilient varieties that can withstand all these conditions, because it is not possible to predict what will happen in next season.”

But developing these seeds isn’t easy. The process takes time and money. There are genomic boundaries to raising rice’s tolerance to salinity—though some researchers are cracking that with genetic modification. Getting them into a market dominated by commercial breeders is another hurdle.

And there are limits to what technology can accomplish in landscapes shaped by complex human and natural pressures. “On the ground, there are many challenges,” said Burman.

Four million people live in the Indian Sundarbans, on land that lies just one to two metres above sea level. Farming has always been difficult here due to frequent flooding, paucity of freshwater, and acidic soil. Most paddy farmers are small or marginal landholders; more than 40% of the population lives below the poverty line.

Increasing salinity is adding to that challenge but is not only due to rising seas and storms. Upstream dams and other development pressures have drastically reduced freshwater flows in the rivers that braid the region.

The pressures were evident on the road from Kolkata to Canning in February. Initially the landscape is dotted with large-scale brackish aquaculture farms that leak salt into surrounding fields and brick kilns that ruin the soil for agriculture. Along the way are glimpses of the Matla River, which once carried water from the Ganges into the sea but is now largely fed by the monsoon and tides. Salinity in the Matla increased by around 32% between 1984 and 2013, according to one study. At Canning, the river is a brown ribbon of silt. 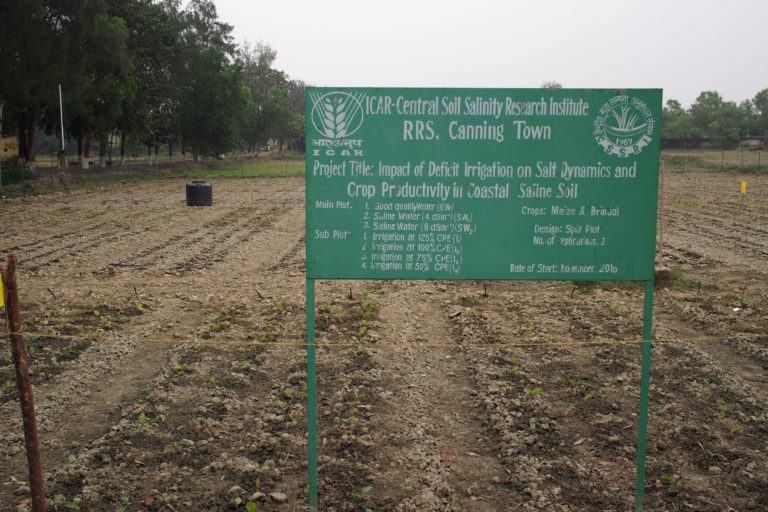 Scientists at the CSSRI field station in Canning in the Sundarbans conduct field experiments to trial new seeds under different water conditions and farming techniques. In this field, wheat and brinjal are being grown under different water supply conditions in saline soil. Salinity and water shortages are the main challenges for farming in this coastal region. Photo by Vaishnavi Chandrashekhar.

The effects of rising salinity are already apparent in the ecosystem. Some mangrove species, including the ‘sundari’ that gave the area its name, are dwindling. The potential impact on farming was made clear in 2009 when Cyclone Aila hit the coast with a 4 metre storm surge. The inundation left an encrustation of salt on the land. Thousands abandoned their fields and migrated to Kolkata and other cities for work. Even after ten years, the land has not fully recovered, said Sujit Mondal, a farmer in Rangabelia village on Gosaba Island. He still cannot grow chili, which was his most profitable crop before Aila.

After Aila, local farmer-activists like Amales Misra in Sagar Island revived heirloom rice varieties that had been side-lined after the Green Revolution. These flourished in newly saline soil where commercial seeds failed. CSSRI also collected 63 traditional varieties, some of which they used to create new ones. Traditional varieties are hardy, said senior scientist SK Sarangi, but low in yield. And the grain shape and texture is often not what consumers want. The challenge for scientists like Sarangi is to create seeds that satisfy diverse requirements.

On Gosaba, farmers say they prefer tall, long-duration rice for the monsoon when fields are submerged for four months. Yield and texture are less important because monsoon rice is for home consumption. But in the dry season, they want high-yielding salt-tolerant breeds that produce long fine grain that sells well on the market; a variety called Laliminikit is popular here. Soil and water conditions can be hyperlocal: Gosaba has enough fresh water for farmers to sow a second rice crop; the neighbouring island of Bali does not. Finally, said Sarangi, these rice varieties can’t require too much fertiliser or pesticides. “The farmers can’t afford to spend much,” he said.

For that reason, CSSRI and NGOs like the Tagore Society for Rural Development are promoting water harvesting, drip irrigation, soil management and crop diversity, alongside better seeds. In Rangbelia, Mondal has started growing grass pea, or laythra, along with rice in the dry season. He has a small pond to store water for irrigation and cultivate fresh-water fish that supplements his income. Dry straw mulching can be seen on some fields to protect soil moisture. CSSRI is also promoting ridge and furrow land-shaping techniques—the furrows help with drainage and the less-saline ridges can be used to grow vegetables. 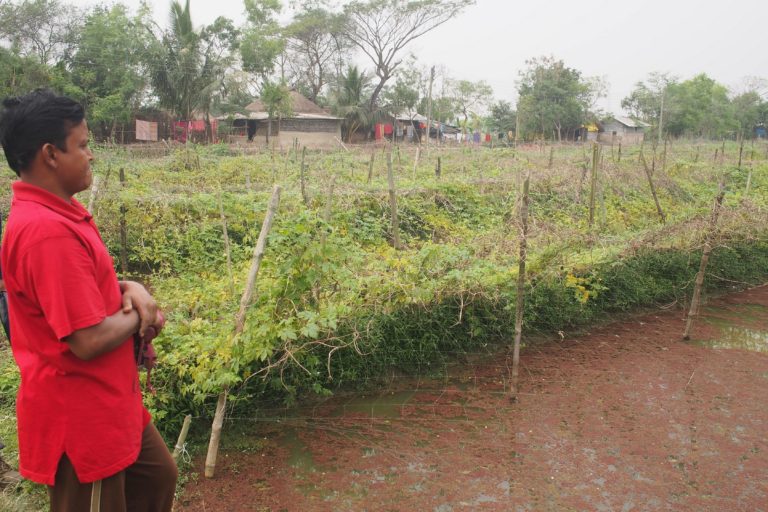 Panchanon Saha, 39, used to harvest only a monsoon paddy crop on his land near Canning in the Sundarbans. But this February, he was growing a second crop of cucumber, bitter gourd, tomatoes and beans, seen above. A CSSRI project helped him try out new seeds and farming techniques especially ridge-and-furrow landscaping which allows crops to be grown on the less saline ridges. He also built a pond to harvests rainwater for irrigation and cultivate freshwater fish, and is now trying out a neem-based pesticide. Photo by Vaishnavi Chandrashekhar.

Better farming methods along with improved seeds can increase crop productivity by half a ton per hectare in this saline land, said CSSRI’s Burman. At least for some farmers, that has been true. Panchanan Saha, a farmer near Canning, has seen his income almost double in recent years. He has expanded from one crop a year to three—the last a harvest of beans, cucumber and bitter gourd. He used to go to Kolkata several months a year to supplement his income by working on construction sites. Now, he said, “I don’t have to go to the city anymore.”

SOURCE:
Mongabay
AUTHOR:
Vaishnavi Chandrashekhar
SUPPORT:
Pulitzer Center
COVER PHOTO:
Paddy fields in the Indian Bengal Delta are converting to aquaculture and brick kilns, including in Minakhan a few hours from Kolkata. Commercial aquaculture is profitable but can leak saltwater into the surrounding soil. Brick kilns produce material for the expanding city; their number has expanded by 18% between 2010-11 and 2016-17 in the delta. Credit: Vaishnavi Chandrashekhar.