This limitation is likely to intensify in the future because climate change is predicted to lead to lower rainfall in many regions. This could decrease yields by 10% by the time global temperatures have increased by 4°C. Droughts are also predicted to become more frequent and severe.

Higher temperatures are also predicted for many parts of the world and will have direct effects on maize growth and productivity. Warming will also lead to more evaporation, which means that plants lose more water.

But it is difficult to predict the effects of a changing climate on crop yields. That’s because the effects of rainfall and temperature can interact in complex ways. Rising carbon dioxide (CO₂) in the atmosphere, which is a result of industrialisation, only adds to the uncertainty. However, as our new research conducted in South Africa shows, it may offset some of the impacts of drying and warming on maize crops in tropical growing regions like those found in much of Africa.

CO₂ is an important resource for photosynthesis and its low availability in the atmosphere has been a major limiting factor to plant growth for millennia. This has led some plant groups, particularly grasses, to evolve a photosynthetic pathway that concentrates CO₂ and makes photosynthesis more efficient under low CO₂.

Maize also has this pathway, known as C4 photosynthesis. Under warm and humid conditions, its growth is thus not limited by CO₂ availability and so it gains no direct benefit from increasing atmospheric CO₂. However, elevated CO₂ allows plants to take up enough CO₂ while keeping their leaf pores (stomata) partially closed. This decreases plant water loss and could potentially increase the drought tolerance of maize.

Research has been done in Europe and the US to ascertain how elevated CO₂ might indirectly increase the productivity of C4 plants like maize. These studies found that elevated CO₂ generally had a positive effect on maize growth and compensated for water limitation and warming. However, temperatures and water stress are much higher in most of Africa and other tropical regions than in Europe and the US, raising the question of whether elevated CO₂ can help overcome reduced rainfall under these much more challenging conditions.

We set out to address this knowledge gap. Through a series of experiments conducted in South Africa’s Eastern Cape province, we found that future atmospheric CO₂ concentrations are likely to benefit maize production in tropical growing regions like those found in many parts of Africa. This may extend the future land area available to rainfed maize cultivation by making maize production more water-use efficient.

However, while CO₂ can prolong soil water availability and slow down the effect of drought on photosynthesis, it cannot compensate for a lack of rainfall entirely. Rainfall seasonality thus still plays an important role in determining where maize can be grown. With more data from tropical growing regions, our ability to predict this will increase.

A series of experiments

Experiments are required to predict the interacting effects of increased drought and increased CO₂ on maize yields; these studies allow scientists to manipulate each of these factors, singly and in combination. While manipulating water is fairly straightforward, experimenting with atmospheric CO₂ requires specialised and costly facilities. It is therefore not surprising that the leading experiments on the effects of temperature, water and CO₂ have been done under temperate conditions in the northern hemisphere, where research resources are concentrated.

Plants were grown over the summer season and were either irrigated daily or left to grow with only the little rainfall that fell naturally. The study area has too little summer rainfall to be a viable maize growing region; this allowed us to simulate the effects of drought under hot and dry summer conditions.

To examine the effect of atmospheric CO₂, we compared current conditions of 400 parts per million (ppm) to those predicted to occur towards the end of the 21st century (800 ppm). The air temperature in the open-top chambers was 4-5°C higher than ambient, which is in line with future climate predictions. 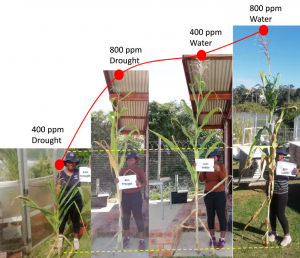 Study co-author Tebadi Burgess (née Bopape) holds maize plants that she grew at either current or
future atmospheric CO₂ concentrations with and without drought.

Adding elevated CO₂ to unwatered plants resulted in the same growth and yield as irrigation at ambient CO₂. This shows that elevated CO₂ had the same effect on plants as daily irrigation and thus completely compensated for drought. When given additional CO₂, plants needed less water, because they could partially close their leaf pores and avoid water loss.

Irrigated maize yields increased with added CO₂. This suggests that even under irrigation, hot and dry weather can cause water stress and reduce productivity.

This research shows that future atmospheric CO₂ concentrations could help alleviate the effects of warming and drought, even for irrigated production. However, more research is needed to determine the effects of intermediate CO₂ concentrations between 400 and 800 ppm, which will be experienced between now and the end of the century. Data on the effects of other variables, such a soil type and severity of climate, are also needed to calibrate realistic models to forecast future maize production.