In rural Morocco, one woman’s efforts transform the lives of many

As she packed up her belongings and said goodbye to her old home, Fatima-Zohra wondered what she’d find at the other end of her journey. She and her husband were about to move to Kandar Sidi Khiar, a rural village in the Sefrou province of northern Morocco – a much different environment than the bustling coastal city of Larache, where she’d grown up.

In Kandar Sidi Khiar, she found a community with a rich heritage and tradition, known especially for the abundance of aromatic and medicinal plants that grow in the surrounding forests, and for its wealth of experience with rearing sheep and goats. But as she settled in, she noticed that the women weren’t very active in the local economy. She soon learned that the region held few job opportunities for women, and their access to assets like land and finance was limited. While some helped their husbands with their businesses, many didn’t work outside the home at all.

The more she got to know these women, the more she realized they were eager to make a change – and that they were enthusiastic and ambitious about going into business for themselves. She became determined to establish something that would give them a way to earn a stable income and integrate themselves into the local economy, and she wanted it to draw upon their heritage and the know-how they already had.

In 2013, she founded a weaving cooperative with 22 members. Using wool sheared from locally raised sheep, they wove first by traditional methods and then with the use of modern machinery, obtained through funding from the National Initiative for Human Development in 2014. Unfortunately, they were unable to compete with the cheaper alternatives on the market, and the cooperative closed down two years later.

Undaunted, Fatima-Zohra established another women’s cooperative in 2017. This time, she sought the support of PDRZM, an IFAD-funded programme dedicated to revitalizing small-scale agriculture in Morocco’s mountainous zones. Climate change and desertification have hit these areas hard, making traditional agricultural practices difficult and limiting the incomes of small-scale producers. 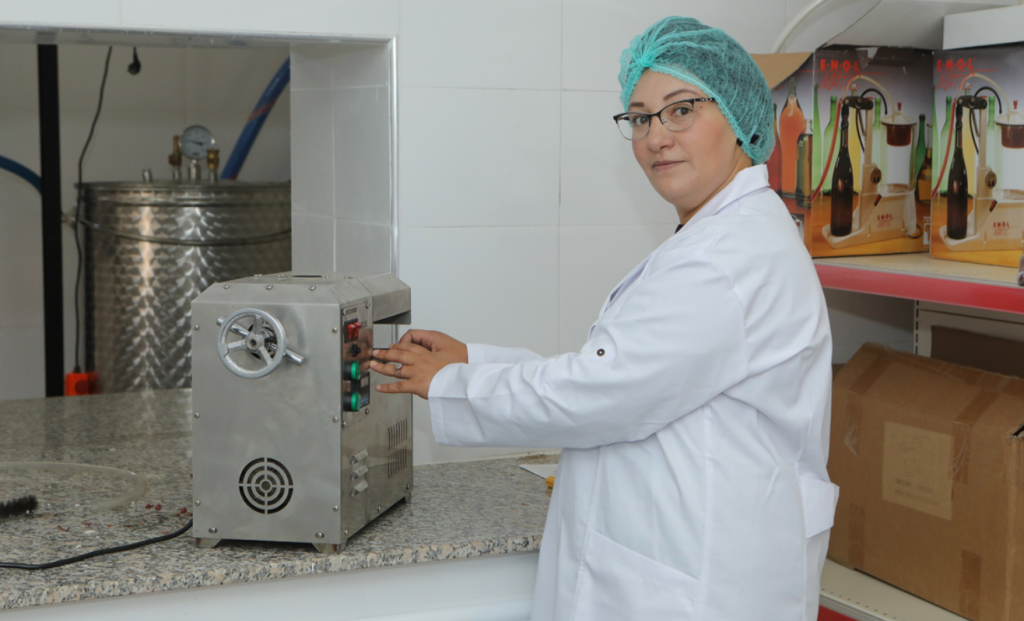 Fatima-Zohra extracts essential oils in the processing unit set up with PDRZM’s support.

The new cooperative included 18 women with extensive experience in raising sheep and goats. They started with 108 ewes and 3 rams received from PDRZM – along with 20 beehives. As the programme representative explained, bees thrive in forested areas like Sefrou, and honey almost always fetches a good price at the market. The women also eagerly took part in the variety of classes offered by PDRZM – everything from beekeeping to sheep rearing to accounting.

By 2021, their flock had grown to 400 ewes and their bees occupied 42 hives, which collectively yield 126 litres of honey per year. Selling the ewes and honey produces enough income for the women to improve their living conditions and those of their families. It’s also helping each of them become more financially independent.

But Fatima-Zohra was determined to keep going. She knew that the woodlands of Sefrou were full of rosemary, lavender and thyme, all of which have a variety of uses in cosmetic, medicinal, and food products. Surely, she thought, there’s a way for these communities to benefit from them.

In 2021, she established the Economic Interest Group Arôme Agay, whose 70 members – 56 of whom are women – are now dedicated to extracting, processing and selling essential oils derived from these three plants. She used a grant from PDRZM to prepare a space for them to work: she purchased new washbasins, had the interiors painted, and had a wall constructed to create a dedicated extraction room. She also obtained national food safety certification for the group, which helps them form partnerships and sell their products to an ever wider range of audiences.

From her earliest days in the village to Arôme Agay, Fatima-Zohra is an outstanding example of how one person’s initiative can change the lives of many others. Thanks to her, dozens of women now have stable sources of income and form an integral part of the socio-economic fabric of their community.

Explore IFAD’s work on gender and read more about IFAD’s presence in Morocco.