Maize is key to Tanzania’s economy, accounting for at least 15 percent of the country’s food production (FAOStat 2020). At least 82% of farmers in Tanzania grow maize, the majority of whom are likely to be smallholder farmers. But as is the case across much of Sub-Saharan Africa, most smallholders in Tanzania rely on rain-fed agriculture. This leaves them vulnerable to the impact of agricultural and climatic risks.

So how should smallholder farmers protect their investments and potential income? Through agricultural insurance, farmers can improve their resilience and safeguard their incomes. The impact of climate change has led to increasingly unpredictable rain patterns in Tanzania, while growing pest infestations have compounded the risks that farmers face. Insurance has the potential to protect smallholder farmers from these risks and safeguard their livelihoods.

Between October and December 2021, Pula carried out a feasibility study in partnership with IFAD, through financing from INSURED. The study assessed how smallholder farmers using open pollinated variety (OPV) maize seed could benefit from agricultural insurance. We used a mixed-methods approach to understand the insurance market for OPV maize farmers in four regions: Dodoma, Manyara, Morogoro and Singida. Within these regions and across the country, maize is cultivated by around four out of five farmers.

Our research found that pests and diseases pose the highest risk to smallholders (figure 1): at least 80% of farmers surveyed reported fall armyworm and locusts as their biggest challenge in recent years. Between 2019 and 2020, the regions bordering Kenya experienced locust infestations and faced huge yield losses.

Climate and weather-related challenges, such as drought and floods, are likely to impact yields too. Around 67% of the farmers surveyed reported drought as their second biggest challenge. During the 2019-2020 agricultural season, severe floods led  to significant losses for farmers in some of the country’s main crop production regions, such as Manyara, Morogoro and Mbeya.

Our assessment found that area yield index insurance (AYII) can offer OPV maize farmers comprehensive and affordable insurance cover against a range of risks (figure 2). Our field research showed that weather index insurance (WII) and multi-peril crop insurance (MPCI ) have been used in previous agricultural insurance pilots in Tanzania, but few – if any – have been successful in scaling. 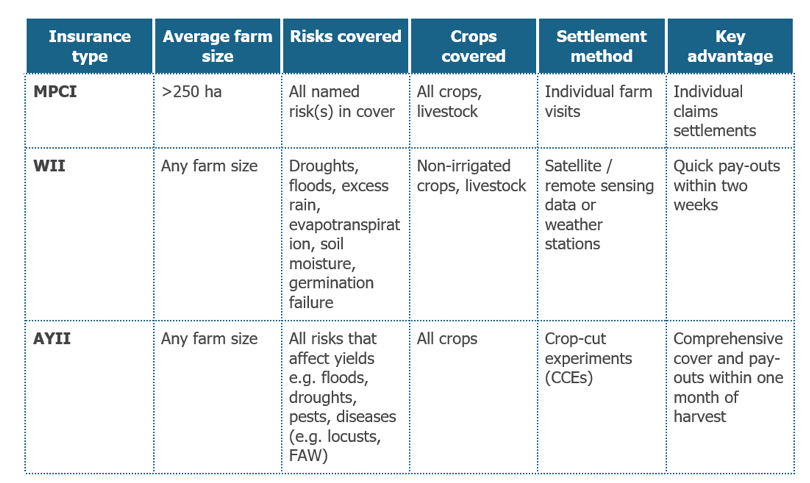 Beyond price and affordability, farmers who were unwilling or unsure about purchasing insurance gave several reasons why. These include a lack of trust in insurance, negative perceptions around the claim settlement process, and a lack of understanding on how insurance works.

Some of these concerns are justified. MPCI is an unsuitable product for many smallholder farmers as it is expensive. WII is more affordable, but it does not cover pests and diseases – limiting the protection against the greatest risks to farmers’ production. Prior experience with WII had resulted in several basis risk events: farmers did not receive pay-outs even when they experienced low rainfall. This led to a general sense of mistrust among both farmers and other stakeholders in Tanzania.

Our research found that AYII could offer value-for-money insurance coverage. For AYII to achieve sustainability and scalability, it should be bundled with products relevant to farmers – such as loans, inputs and pay-as-you-go solar products. Pula’s experience in other markets has shown that bundled insurance can reach more farmers and lead to a stronger rural foothold for insurers than standalone products.

In Tanzania, insurance could be used to protect farmer loans. The government provides a guarantee scheme that encourages commercial banks to increase their lending to farmers. The banks can embed AYII within their agricultural loans, with premiums included within the loan interest rate. If farmers’ yields are adversely affected, the bank and the farmers could receive an insurance pay-out. This can be used to offset the farmers’ repayments against their outstanding loan amounts, avoiding the risk of default in the process. Pay-outs to farmers could be used to redress any loss of income.

This approach has worked well in other markets. In Nigeria, Pula insures the agricultural loans disbursed by the Central Bank of Nigeria through its Anchor Borrower’s Programme. For the 2020 season, over 50,000 smallholder farmers were paid $7 million for floods in the north of the country and droughts in the south. At around $140 per farmer, this record sum showed how AYII could safeguard livelihoods.

Take a look at the INSURED programme’s Insurance Toolkit with technical tools and knowledge briefs for project teams. INSURED is implemented by IFAD through the Platform for Agricultural Risk Management (PARM).

This piece was originally posted by Pula on https://medium.com/pula-advisors