Jeffrey Chimenya’s mindset about the potential of agriculture changed once he joined the Nyadanawo Farmer Field School, supported by FAO as part of the European Union-funded KULIMA programme. Now he knows he can have a thriving business as a farmer.

Jeffrey Chimenya could not imagine that agriculture could one day allow him to own a decent home and have a thriving milk supplying business. Farming meant subsistence for Jeffrey; it didn’t mean success. Yet today, four years after joining the Nyadanawo Farmer Field School (FFS), Jeffrey says that his dreams are coming true. He is financially stable, able to take care of his family, and most importantly, has nutritious food available for his household.

Before participating in the Nyadanawo FFS, an initiative supported by FAO as part of the European Union-funded KULIMA programme, he says he struggled with dairy farming for seven years and saw little success. He bought cows simply because he saw others doing the same and he kept and fed them without any systematic approach.

“I started out with one heifer in 2012. Unfortunately, dairy farming was new territory for me, so I did not know how to go about things. By 2019, I only had three cows and no real benefits from my efforts,” he says.

When Jeffrey joined Nyadanawo FFS in 2019, he realized that, done correctly, livestock has huge potential for generating income. With the livestock management skills and knowledge he started to acquire, Jeffrey began reviving his ailing dairy business. He grew his herd to eight cows, which produce 50 -70 litres of milk daily and began to earn a regular income through sale of milk to processors and community members. He also keeps some of the milk for his family as a regular protein source. Jeffrey’s goal is to have 10 dairy cows by 2023, which based on his current experience, he says is achievable.

With the support and training from the FFS, Jeffrey also ventured into horticulture and started to grow tomatoes. With this additional income, he was able to buy land and build a new house to improve his family’s living conditions.

“I married into a matrilineal culture, which meant that I had no land ownership in my wife’s village. This made it important for me to find my own piece of land and establish my family as an independent and self-sufficient unit. Thanks to the FFS teaching, I am applying the knowledge and skills acquired to the letter, and I am reaping good results,” said Jeffrey. 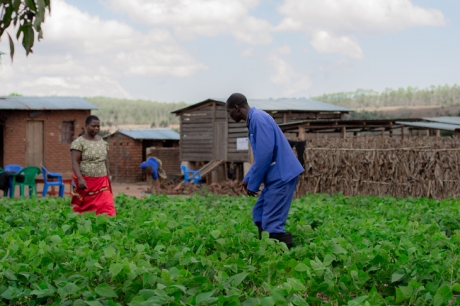 With the additional income the Chimenyas have earned through horticulture and better management of their livestock, they have bought land and built a good home for themselves.

Empowered for the future

Jeffrey, at 47 years of age, has become one of 8 303 FFS community-based facilitators (CBFs). These CBFs facilitate information exchange and the learning process within the groups which they support and also pass on the knowledge they learn in the FFS to their wider community. Jeffrey’s group has 30 members, and he is encouraging them to achieve their own visions. He sees their potential and wants them to understand that they too can attain their goals. Not all community members trust the FFS approach, so he provides practical, comparable and visible examples of its success to ensure his group stays on course.

Jeffrey says that being able to figure out what to do when there is a challenge has been the greatest and most empowering gain from FFS. He recalls when the Nyadanawo FFS group was struggling with goat farming: “Nyadanawo FFS received goats through the KULIMA project, but they started dying off,” describes Jeffrey. This district of Malawi faces cold and wet temperatures and because of this, the goats were catching pneumonia and perishing.

The group didn’t realize that they needed to insulate the goat pen. However, with the FFS training that advised tracking the condition of each animal, they uncovered the problem and, with help from the extension officer, they added plastic sheets to the pen which resolved the issue.

“We were empowered enough as a group to work out the problem and of course consulted with the extension worker in our area for guidance,” he says.

Nyadanawo FFS members have now mastered the management of goats, and they have seen over 18 births, with kids being passed on to group members for their own households. 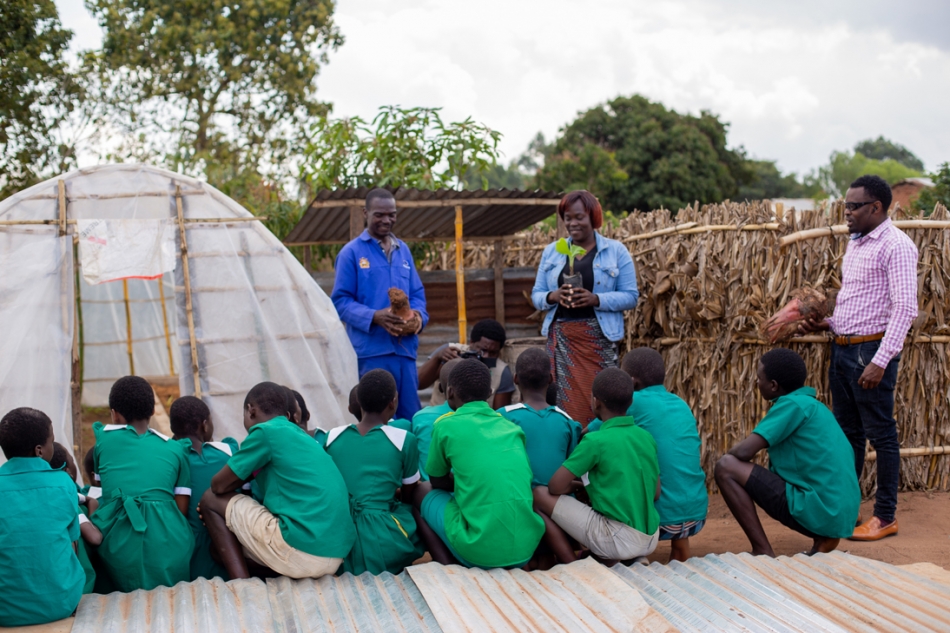 Jeffrey is an FFS community-based facilitator with his own group of 30 members. He also hosts students from surrounding schools for educational visits.

Being self-reliant when tackling the complex challenges which farmers in Malawi face due to the effects of climate change is a significant outcome of FFS. It has enabled Jeffrey and other members of the FFS to consider how to diversify and integrate their agricultural enterprises and use available natural resources in a more sustainable way.

For example, Jeffrey collects waste from the group’s goat enterprise and uses this to prepare compost manure. The manure contributes to improving soil fertility for their individual banana orchards and horticultural fields. The compost is also being used to improve soil nutrition for a backyard garden, which together with a chicken pen, ensures that the Chimenyas are well supplied with vegetables, meat and eggs for nutritious meals. As another example, after the maize harvest, stalks are converted to cattle feed when it is otherwise scarce, maximizing resources that would otherwise go to waste.

“What is amazing about a farmer like Jeffrey is that he takes the knowledge and makes it his own. The Chimenyas have embraced the knowledge and skills and are working together to transform their household and community,” said Chifundo Staubi, an agricultural extension worker and FFS master trainer under the KULIMA programme.

To date, through the FAO-supported KULIMA programme and in collaboration with the Government of Malawi, 402 extension workers have been trained as FFS master trainers and 396 lead farmers as CBFs. CBF courses are ongoing in 602 sites with a total enrolment of 8 122 people. The programme aims to train 600 master trainers and 8 000 CBFs by the end of the programme in December 2023.